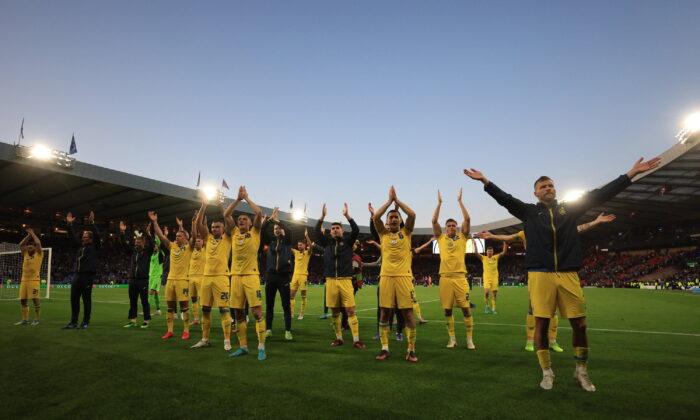 Ukraine celebrates and applauds its fans after the match and its victory during the FIFA World Cup Qualifier match between Scotland and Ukraine at Hampden Park in Glasgow, Scotland, on June 1, 2022. (Lee Smith/Action Images via Reuters)
Soccer

GLASGOW, Scotland—Ukraine kept alive their dream of reaching the World Cup finals by beating Scotland 3–1 in their playoff at Hampden Park on Wednesday in their first game since the Russian invasion of their country.

Ukraine will now face Wales on Sunday in Cardiff with the winner taking a place at November’s finals in Qatar. The loss means Scotland remain without an appearance at a World Cup since 1998.

Goals from Andriy Yarmolenko and Roman Yaremchuk had put a confident and dominant Ukraine 2–0 up before Callum McGregor pulled a goal back for the Scots in the 79th minute.

The goal injected some belief into Scotland who applied some late pressure but deep into stoppage time substitute Artem Dovbyk finished off a counter-attack to secure the victory.

An emotionally drained Ukraine coach Oleksandr Petrakov said his team had been playing for all those struggling back home.

“We took baby steps towards our great aim, we have the Wales game to come and we will do everything people expect us to do,” he said.

Ukraine’s traveling support, who had come from across the United Kingdom and from as far away as Australia and the United States to cheer on their team, were jubilant with many no doubt now planning to extend their trip to a weekend in South Wales.

Whether they will be planning trips to Doha after Sunday’s game remains to be seen but they will certainly have plenty of belief after an impressive display.

Ukraine’s domestic competition was halted after the war and the country’s home-based players have not played competitive football since December but they were quick out of the blocks and caused Scotland problems from the outset.

Home keeper Craig Gordon had to make three saves in the opening 25 minutes to keep the game scoreless with Ukraine’s smooth passing and movement too much for a hesitant Scottish defense.

The goal finally came in the 33rd when Yarmolenko sprung the offside trap and latched on to a ball over the top from Ruslan Malinovskyi and lobbed the advancing Gordon.

Ukraine were full value for their halftime lead and extended their advantage four minutes after the break when Yaremchuk beat two Scottish defenders to reach a cross from Oleksandr Karavaev and head into the far corner.

With the home crowd turning against their team and sloppy passing undermining attempts to gain any sort of momentum, Scotland looked beaten but they found a way back into the game.

Ukraine keeper Georgiy Bushchan punched the ball out in a crowded box and McGregor struck it goalwards and although Taras Stepanenko looked to have cleared, the ball was ruled to have crossed the line and a goal awarded.

Hampden was awakened and with Ukraine tiring, Scotland pushed forward in numbers in search of a way to take the game into extra time.

But after wasting a couple of chances on the break, with the final kick of the match, Dovbyk put the game to bed and set off emotional celebrations.

It was a deserved win for Ukraine and one which came more from their quality football than their expected spirit.

For Scotland it was a bitter end to their hopes of a first World Cup appearance in 24 years.

“It’s a disappointing night. You have to be honest, the best team on the night won,” said coach Steve Clarke.

“Now is a night to suffer, we’ll suffer together. It’s going to take at least 48 hours just to move on. When you lose a game of this magnitude it hurts,” he added.