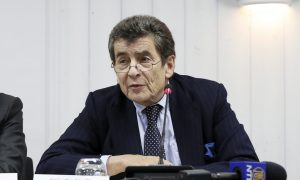 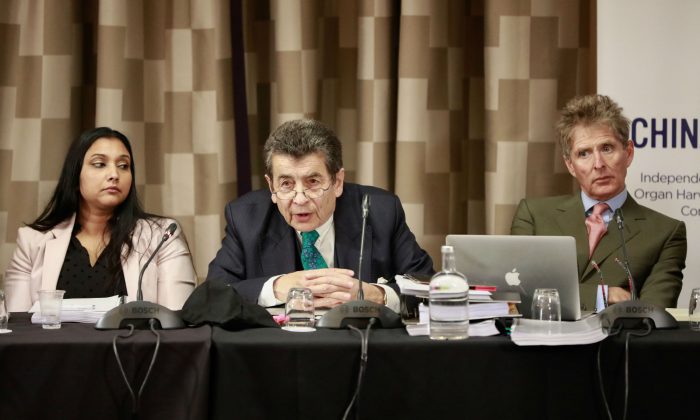 An independent people’s tribunal in London has heard evidence concerning the mass killing of prisoners of conscience for their organs in China.

From April 6 to 7, two dozen witnesses, including researchers, medical professionals, journalists, and survivors from around the world, gave testimonies before the tribunal on allegations of state-sanctioned organ harvesting targeting persecuted groups in China, including practitioners of the spiritual practice Falun Gong and the Uyghur ethnic minority.

The tribunal follows a three-day hearing that took place last December, when tribunal members passed a draft interim judgment concluding that forced organ harvesting from prisoners of conscience has taken place in China “on a substantial scale.”

Chaired by Sir Geoffrey Nice, QC, who previously led the prosecution of former Yugoslavian President Slobodan Milosevic at the International Criminal Tribunal, the panel consists of seven experts tasked with conducting the world’s first ever independent analysis of forced organ extraction in China.

According to legal counsel Hamid Sabi, the tribunal invited representatives from the Chinese regime, including top health officials and Chinese embassy officials in London, to participate in the hearings, but did not receive a response.

Refugees who have escaped persecution in China gave evidence at the tribunal, recounting that they had received blood and medical testing during their detention.

Mihrigul Tursun, a Uyghur who last year testified before a U.S. congressional committee about being tortured and abused at an internment camp in the northwestern region of Xinjiang, told the tribunal via video on April 7 that camp detainees underwent detailed health checks, including blood tests and ultrasounds.

The U.S. Department of State and other international experts estimate that the communist regime is holding more than 1 million Uyghurs, ethnic Kazakhs, and other Muslim minorities in a vast network of internment camps in Xinjiang, as part of a purported campaign to combat “extremist threats.”

Tursun said she was tortured under interrogation for three days in April 2017, after which she was transported—while hooded, cuffed, and shackled—to an exam room in a hospital.

“I knew that they took blood from my arm twice, but I don’t know how much blood was drawn,” Tursun said through an interpreter.

She said she also received blood pressure tests and medical tests to check her heart condition.

Tursun said she was then led to a dark room in what she suspected was the basement of the hospital. In that room, the handlers removed her hood and restraints, and then all her clothes. They then attached equipment onto her chest area and used a machine to examine her body.

Her handlers then put liquid on Tursun’s forehead, shoulders, just below her heart, and both legs, and placed her into a glass machine, where she was made to circle inside while shouting numbers from one to 10.

Tursun could not hear anything while inside the machine.

“I became terrified after I was placed into that machine. I thought they may be taking my internal organs and that I might die that day,” she said through the interpreter.

Another Uyghur woman, Gulbahar Jelilova, who was detained for more than one year at three facilities in Xinjiang in 2017, testified on April 6 about receiving regular blood and ultrasound tests during detention.

Dolkun Isa, president of the World Uyghur Congress, a Uyghur rights group, told the Tribunal on April 7 that the organization has received first-hand evidence from former Uyghur detainees suggesting widespread medical examinations inside the facilities, as well as reports of detainees being taken from their cells and never returning.

Isa added that around 11 million Uyghurs outside the facilities have been subject to blood testing through a large-scale “physical exam” project launched by Chinese authorities in Xinjiang in 2016.

Ethan Gutmann, China analyst and investigator, testified on April 7 about the Xinjiang crisis.

“You have maybe a million and a half people who have all been blood tested and they’re in detention, and their families have lost sight of them,” Gutmann said.

He said that recent evidence indicates the Chinese regime is targeting this group for organ extracting, including accounts of DNA testing being conducted at the homes of Uyghurs in Xinjiang and the known construction of regional crematoriums and a dedicated lane for transferring organs for transplant surgery at a local airport.

In 2016, Gutmann co-authored, with Canadian human rights lawyer David Matas and former Canadian Secretary of State (Asia-Pacific) David Kilgour, an in-depth report that found a huge discrepancy between China’s official transplantation figures and the number of transplants performed in hospitals

By analyzing the public records of 712 Chinese hospitals that carry out liver and kidney transplants, the report showed that roughly 60,000 to 100,000 transplants are being conducted each year, far outstripping the officially reported number of 10,000 to 20,000 per year.

The shortfall, the report concluded, is made up by organs forcibly harvested from prisoners of conscience in China, primarily from practitioners of Falun Gong (also known as Falun Dafa), while Uyghurs, Tibetan Buddhists, and some house Christians also have been targeted.

“The evidence is overwhelming that this terrible trafficking of organs is taking place, and is increasing, in China,” said Kilgour, who testified at the tribunal on April 7.

“There has been no been serious attempt [by the Chinese regime] to rebut or refute what we say,” he added.

Several Falun Gong practitioners gave evidence during the December and April hearings, speaking of their experiences of being detained for their faith in China.

Aside from personal accounts of torture they experienced inside China’s labor camps and prisons, all spoke of undergoing physical examinations during detention.

Feng Hollis, who was arrested in 2005, said in her December testimony that at the time, she wondered why she was given a medical test despite being frequently tortured in prison.

Two researchers who conducted an unprecedented study of China’s official voluntary donor transplant data told the Tribunal on April 7 that according to their analysis, the official data curiously aligned with a basic mathematical equation, suggesting that it was manufactured.

“We found many anomalies that are difficult, if not impossible, to explain without concluding that the data had been manipulated manually,” said Matthew Robertson, study co-author and doctoral student at the Australian National University.

In their study, Robertson, along with statistician Raymond Hinde and professor of surgery at Tel Aviv University Jacob Lavee, examined data from the China Organ Transplant Response System (COTRS), as well as local Red Cross figures, and found that the numbers conformed to a quadratic equation that produced a particular type of curve.

“It would be unexpected to happen, [that the numbers conformed to] such a smooth rate as that,” said Hinde.

One example of anomalous data suggesting possible manipulation, Robertson said, was that the total number of registered organ volunteers published by China’s Red Cross increased by exactly 25,000 from December 30 to 31, 2015.

“We can’t say a lot more than it looks a bit suspicious,” he said.

The study is currently under peer review with a scientific journal, and has been released in preprint form.

The tribunal is due to release its final judgment on June 17, to determine whether international crimes have been, and continue to be committed with regard to forced organ harvesting in China.

Correction: A previous version of this article misspelled the name of torture victim Mihrigul Tursun. The Epoch Times regrets the error.