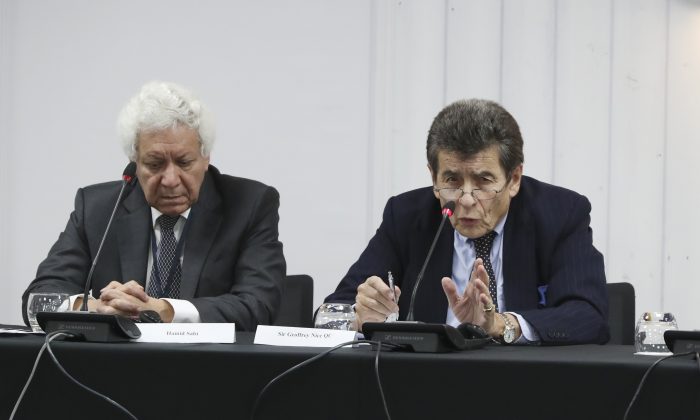 Legal counsel to the tribunal Hamid Sabi and chair to the tribunal Sir Geoffrey Nice QC on the first day of public hearings in London on Dec. 8, 2018. (Justin Palmer)
China Human Rights

LONDON—Members of an independent people’s tribunal have unanimously concluded in an interim judgment that forced organ harvesting from prisoners of conscience has taken place in China “on a substantial scale.”

The draft judgment, which is unusual for a people’s tribunal, was made Dec. 10 in hopes that it may spare innocent lives from harm in China.

“[The] oxygen of publicity may allow the real oxygen of life to continue for those who might otherwise be killed,” said chair of the tribunal, Sir Geoffrey Nice QC, who previously led the prosecution of Slobodan Milošević at the International Tribunal for the former Yugoslavia.

The final judgment is due in spring of next year, and is set to detail whether international criminal offenses were committed, who the perpetrators are, and the numbers of forced organ harvesting victims involved.

Until then, submissions of evidence are still open, and so is the invitation to the Chinese regime to join the proceedings, for which they have so far provided no response.

Public hearings for the China tribunal started Dec. 8 and ran for three days, during which more than 30 witnesses, including refugees, investigators, and doctors presented disturbing evidence.

“The charges are that many groups including Falun Gong practitioners, Uighurs, some Christians, and some Buddhists, have been taken as prisoners, checked on a regular basis whether they are medically fit, and then, when the time comes, their organs are removed. Some stories say without any anesthetics, in a very horrible way—and immediately transplanted into an organ visitor,” said Hamid Sabi, legal counsel to the tribunal, before the hearings began.

As witnesses recounted their experiences during the hearings, some in the audience found it hard to hold back tears. Several refugees who said they fled persecution in China recalled being detained, tortured—and having medical tests.

One witness recalled painful memories of torture, including being chained to the floor for more than 10 hours, being electrocuted, and being force-fed for 58 days. After that, she explained how she was sexually harassed by criminals in the prison, as well as the policemen.

“I received physical checks … but they came to realize I was on the verge of death,” she said.

She practiced the spiritual discipline Falun Gong, which has been brutally persecuted in China since 1999.

A recent report from Freedom House found “credible evidence suggesting that beginning in the early 2000s, Falun Gong detainees were killed for their organs on a large scale.”

It added, “The organ-transplant industry in China remains enormous and growing, even as the number of judicially executed prisoners has declined over the past decade.”

Enver Tohti, a Uyghur surgeon, gave evidence about how he was forced to take out organs from a person who was still alive in China in 1995, under orders from his supervisor.

“There’s an English expression, ‘Too good to be true.’ In this case, it’s ‘too bad to be true,'” he said in an interview after presenting his evidence.

“I hope this gives a serious message to the Chinese leader, the things you are doing to your people, Hitler has tried it,” he said. “So don’t try this, because one day, you will be on this court to receive trial.”

People’s tribunals are typically set up by victims of a serious crime, when international bodies are unwilling to investigate an issue.