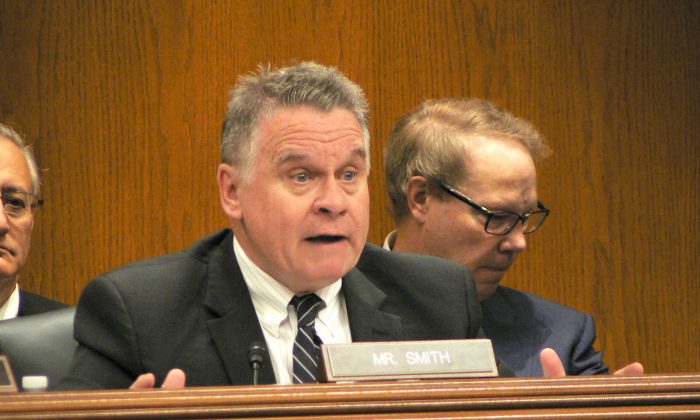 WASHINGTON—U.S. companies came under sharp criticism for helping the Chinese Communist Party build surveillance infrastructure used for the detention of hundreds of thousands in concentration camps in the Xinjiang Uyghur Autonomous Region, at a hearing of the Congressional-Executive Commission on China. An expert said the repression in Xinjiang likely includes mass, forced organ harvesting from Uyghurs.

Sen. Marco Rubio (R-Fla.) said at the July 26 hearing: “It’s hypocritical for American corporations and multinationals doing business in China, who are fully prepared to boycott American cities and American communities because they don’t like things that are happening here, to be okay to turn a blind eye to what’s happening and not criticize the government of China and the Communist Party because they don’t want to jeopardize their ability to sell products in that country. It’s an outrage. It’s an embarrassment.“

“[Google] doesn’t want to give AI technology to the [U.S.] military because, God forbid, we may use it some day to target a terrorist or someone who wants to harm America. But [Google] has no problem opening up a center of AI in China, knowing full well how anything you do in China—if it’s a benefit to the military, they’re going to use it; if it’s a benefit to the security services, they’re going to use it.”

Thermo Fisher Scientific is an American company supplying DNA sequencing equipment to Xinjiang police.  According to Dr. Enver Tohti, a former surgeon from Xinjiang and head of the Uyghur Association in England, starting in June of 2016 the Chinese authorities began a “physical exam” project in which they conducted large-scale blood testing of 15-20 million Uyghurs living in Xinjiang.

Rian Thum, associate professor at Loyola University, and a witness at the hearing, described the situation in Xinjiang as “an emergency that calls for immediate action.”

Witnesses at the hearing testified to the existence of “political reeducation” centers or camps throughout Xinjiang where upwards of 800,000 to 1 million people are held and subjected to torture, medical neglect and maltreatment, solitary confinement, sleep deprivation, and other forms of abuse resulting in the death of some detainees.

At the hearing, U.S. Representative to the United Nations Economic and Social Council Kelley Currie admitted, “The United States is deeply troubled by the Chinese government’s crackdown on Uyghurs, Kazakhs, and other Muslims in the Xinjiang Uyghur Autonomous Region,” but complained that the United States has little support in the United Nations. “We are relatively alone in this,” as the CCP have been using all means to undermine U.S. efforts.

Rep. Chris Smith (R-N.J.) said that the Global Magnitsky Act should be looked at as one of the tools to tackle the problem. He cited the Belarus Democracy Act of 2004, which he authored. “Lukashenko, the dictator in Belarus, was sanctioned, along with about 200 other people.”

Smith described the “Magnitsky Act” as a “tool of surpassing capabilities,” and said that the United States should ask its embassy in Beijing to “give us the names” of “who is responsible for this horrific carnage being imposed upon the Muslim Uyghurs.”

Ethan Gutmann, author of “The Slaughter: Mass Killings, Organ Harvesting, and China’s Secret Solution to Its Dissident Problem” and an investigative journalist who has spent more than a decade investigating live organ harvesting in China, spoke about the significance of the mass blood testing taking place in Xinjiang. He did not take part in the hearing, but commented by email on the situation in Xinjiang.

He said, “History appears to be repeating itself. For the years 2000 to 2008, I postulated that 450,000 to a million Falun Gong were incarcerated in the Laogai System at any given time.

“Now, the Congressional Executive Commission on China has confirmed that half a million to a million Uyghurs are presently incarcerated in ‘re-education’ camps, or ‘transformation’ facilities at any given time. And as anyone who has studied the Falun Gong closely will know, the tragedy lies behind these numbers.”

In Gutmann’s book “The Slaughter” he makes the case that Falun Gong practitioners have been subjected to systematic forced organ harvesting, with their organs used in China’s transplantation industry. Scholars have recently characterized that organ harvesting as a “cold genocide”—one taking place slowly over time.

“Uyghur detainees have been reporting suspicious medical tests for two decades,” Gutmann said. And the blood and DNA testing of the population “was followed by the mass detention of Uyghurs. Now, there may be several uses for the DNA samples, including surveillance (of ‘health’—the Chinese official explanation). But the blood tests? That’s compatible with tissue matching for organ transplant.

“One more number: The Chinese Communist Party is building nine crematoriums in Xinjiang. The first one, near Urumqi, just became operational. And the Chinese are not hiring two or three security guards, as most crematoriums would. They are hiring 50.

“This is what a human rights catastrophe looks like. The signs are unmistakable.”