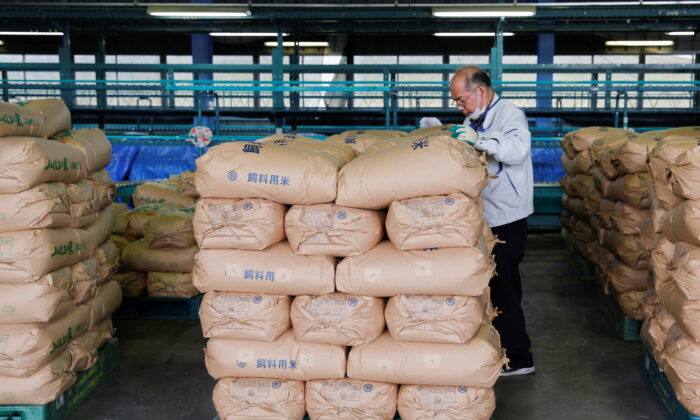 A farmer checks on packs of rice ready for delivery at a sorting site for produce in Iwaki, Fukushima prefecture, Japan, on Nov. 2, 2021. (Sakura Murakami/Reuters)
Asia & Pacific

The British government is soliciting public opinions on lifting Japanese food imports restrictions that have been in place since the Fukushima incident in March 2011, as part of the process to ease the curbs, which are likely to take effect next spring.

Britain’s Food Standards Agency (FSA) has concluded that the removal of import requirements—a limit of 100 becquerels per kilogram on radioactive cesium in Japanese food—would result in “a negligible increase” in the risk to UK consumers, according to its assessment report released on Friday.

The agency’s director of policy Rebecca Sudworth said while the European Commission had evaluated the measures on a regular basis, the public and stakeholders are encouraged to submit opinions on the policy changes by February next year.

“This responsibility has now passed to the FSA, along with FSS, and we have completed a UK import risk assessment and economic impact assessment. We welcome all views on possible changes to the controls, before we advise ministers on next steps,” Sudworth said in a statement.

The British government currently requires inspection certificates for 23 food products from nine prefectures in Japan, including food products from Fukushima, to prove they have been tested for radioactive material and require certificates of origin for other farm products. These requirements will not be needed if the restrictions are lifted.

Meanwhile, in early November, the Japanese government and the operator of the Fukushima nuclear power plant, Tokyo Electric Power Company Holdings (TEPCO), said they will start gradually releasing the water in the spring of 2023.

The goal was to remove hundreds of storage tanks at the plant and make room for facilities needed for its decommissioning. TEPCO plans to send the water through an undersea tunnel and discharge it about 0.6 miles away from the coastal power plant after treating and diluting it with large amounts of seawater.

But the plan has been fiercely opposed by fishermen, residents, and Japan’s neighbors, including China and South Korea.

A massive earthquake and tsunami in 2011 knocked out the Fukushima Daiichi plant’s cooling systems, triggering the meltdown of three reactors. Since then, large amounts of water used to cool the still highly radioactive reactor cores have leaked extensively. The contaminated water is being stored in about 1,000 tanks, which are expected to reach their capacity next year.