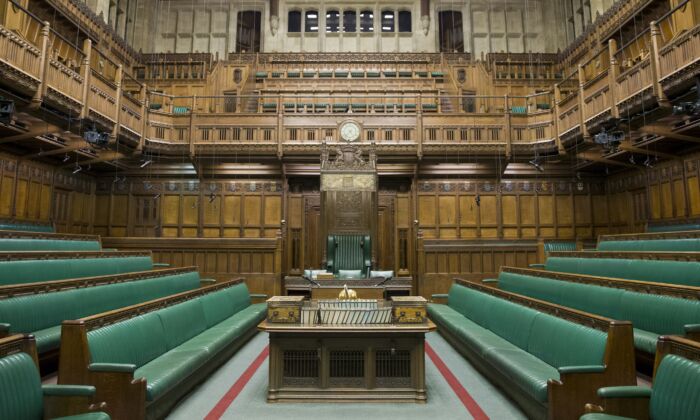 The interior of the Commons Chamber at the Houses of Parliament in central London on Nov. 12, 2015. (JUSTIN TALLIS/AFP/Getty Images)
China Human Rights

In a bid to stop illegal organ trafficking, the UK Parliament recently conducted its first reading of a bill that would ban British citizens from traveling abroad to receive organ transplants whereby the donor has not explicitly given consent, nor receive transplant surgery in which the organ is purchased.

The bill is in the House of Lords go through a second reading, committee stage, report stage, and third reading. After passage, the bill heads to the House of Commons for the same process, after which it will receive formal royal approval.

In recent years, researchers and doctors have sounded the alarm on state-sponsored forced organ harvesting in China, where prisoners of conscience—many of them practitioners of the persecuted spiritual group Falun Gong—have their organs removed without consent, then sold for profit to medical patients in need of an organ transplant.

This June, an independent people’s tribunal convened in London and concluded after a year of investigation that forced organ harvesting has taken place in China for years “on a significant scale.”

The bill is an amendment of Section 32 of the Human Tissue Act (2004), which prohibits commercial dealings in human material for transplantation.

The new proposal adds additional requirements for organ transplant surgery: if the organ is donated, patients must obtain specific consent from the living donor or the donor’s next of kin before they travel outside the United Kingdom to receive the transplant operation.

If the organ is not donated, the patient would be prohibited from procuring the organ through financial or other forms of compensation.

For patients who receive a transplant operation inside the UK with an imported organ, the bill requires the same consent requirements as when procuring an organ from within the UK.

Any patient who receives a transplant operation with the banned organs, and the related people who were involved in the operation, will face penalties in the UK. If convicted in the lower court,  violators can be sentenced to up to 12 months imprisonment and/or a fine.

If convicted in high court, violators face imprisonment of up to nine years and/or a fine.

To track the crimes, the bill requested that doctors and medical professionals keep records for all instances of UK citizens who have received transplant procedures performed outside the UK, and report such cases to the National Health Service (NHS) Blood and Transplant.

Every year, NHS Blood and Transplant is required to produce a report on instances of UK citizens receiving transplant procedures outside the UK.

Other European nations and the EU have previously sought to ban transplant tourism or condemn the Chinese regime for its organ harvesting practices.

Belgium passed a law in April to penalize Belgian citizens and any persons involved in the buying and selling of human organs for commercial purposes, regardless of where the transaction took place.

The European Parliament passed a resolution in December 2013 condemning China for its grisly practice, expressing “deep concern over persistent and credible reports of systematic, state-sanctioned organ harvesting from nonconsenting prisoners of conscience in the People’s Republic of China, including from large numbers of Falun Gong practitioners imprisoned for their religious beliefs, and members of other religious and ethnic minority groups.”

Falun Gong, also known as Falun Dafa, is a traditional Chinese spiritual practice with moral teachings based on truthfulness, compassion, and tolerance. Introduced to the Chinese public in 1992, the practice soon gained popularity, with official estimates of roughly 100 million practitioners in mainland China by 1999. Fearing the popularity threatened the Chinese regime’s authority, then-Chinese Communist Party leader Jiang Zemin launched nationwide persecution of Falun Gong practitioners in July 1999, rounding up adherents and throwing them into detention facilities, labor camps, and brainwashing centers in an effort to eradicate the faith.

In 2006, the first eyewitness gave a public account of how imprisoned Falun Gong practitioners had organs forcibly harvested from them, killing them in the process. Since then, independent researchers have published multiple investigative reports confirming the allegations, including international NGO Doctors Against Forced Organ Harvesting and the World Organization to Investigate the Persecution of Falun Gong.

The London-based tribunal, chaired by Sir Geoffrey Nice QC, who previously led the prosecution of former Yugoslavian President Slobodan Milosevic at the International Criminal Tribunal, unanimously concluded that prisoners of conscience have been—and continue to be—killed in China for their organs.

They reviewed troves of evidence, including testimony from more than 50 witnesses given at two hearings.

There are also a growing number of reports from Uyghur Muslims who survived detention inside “re-education” camps in the Xinjiang region that authorities are targeting them for organ harvesting.

In an October 2018 interview with The Epoch Times, a 54-year-old Kazakhstan national and former detainee at a camp in Urumqi said that authorities divided inmates into two groups: those with or without family members abroad.

“[The Chinese regime] escalates their organ harvesting business, so they will kill those with nobody outside the country, with nobody questioning or asking about them,” the woman said.

The European Parliament resolution called on China to immediately stop forced organ harvesting and release “all prisoners of conscience in China, including the Falun Gong practitioners.”