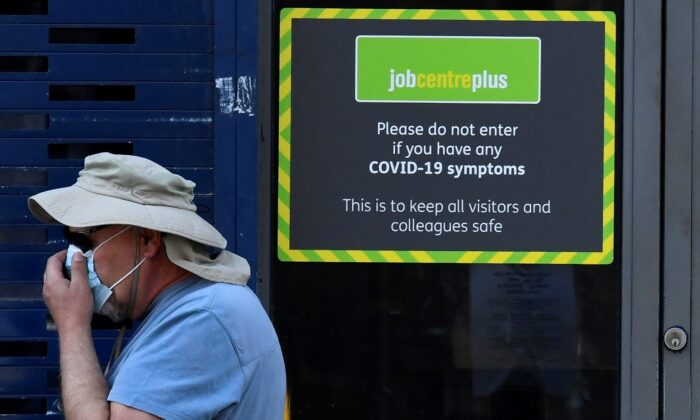 A person wearing a protective mask walks past a Job Centre Plus office, amidst the outbreak COVID-19 in London on Aug. 11, 2020. (Toby Melville/Reuters)
UK

Recent data showing high job vacancies in the UK is being entirely driven by low-paid occupations, according to research.

The Institute for Fiscal Studies (IFS) think tank said around a quarter of the workforce is seeing job vacancies in occupations relevant to them at least 10 percent below pre-pandemic levels.

The IFS said this means up to 8 million workers could be failing to benefit from the high vacancy levels.

The outlook for jobseekers is tougher still when accounting for the fact that there are more people looking for new work and hence competing for these vacancies.

Around two-thirds of unemployed jobseekers are from occupations where competition for jobs is at least 10 percent higher than it was prior to the pandemic.

Xiaowei Xu, a senior research economist at the IFS and an author of the report, said: “While prominent stories about rising vacancies and labour shortages in certain areas are real, we should not be misled into thinking that worker power is back.

“The surge in aggregate vacancies in recent months has been driven by a small set of relatively modestly paid occupations.

“For people in many lines of work, new job opportunities remain well below their pre-pandemic level.

“And it is not just the number of job openings that matters, but how many people are competing for them.

“After all the disruption of the past year, there are more people looking for work than before. Most jobseekers will therefore find job competition to be unusually stiff.”

Last week the Office for National Statistics (ONS) revealed UK worker numbers have rebounded to pre-pandemic levels after the biggest jump in employment since 2014.

The number of UK workers on payrolls rose by 241,000 between July and August to move 1,000 above levels before the coronavirus outbreak.

It also reported that vacancy numbers soared by 249,000 to more than 1 million for the first time since records began amid labour shortages in some key UK industries.