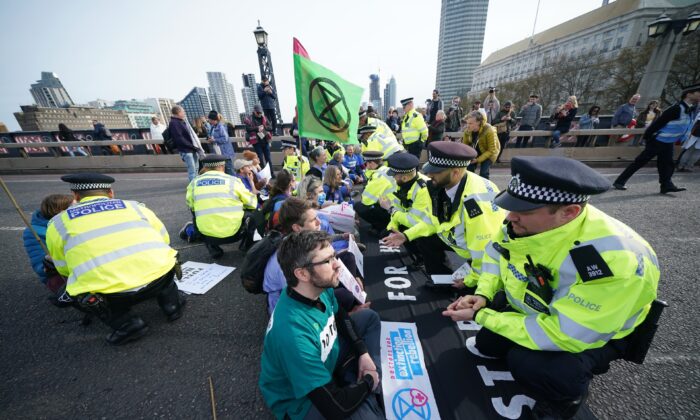 Police talk to protesters taking part in a demonstration on Lambeth Bridge in central London, on April 10, 2022. (Yui Mok/PA)
UK

Prime Minister Boris Johnson’s government has renewed its attempts to stop so-called “guerrilla protests” by groups like Extinction Rebellion, Insulate Britain, and Black Lives Matter, and has threatened to make it a criminal offence for people to glue themselves to buildings or bollards.

Attempts to update the law on public order offences had to be dropped from the Police, Crime, Sentencing, and Courts Bill in the previous Parliament after it was blocked by the House of Lords.

On May 10 the government unveiled a new Public Order Bill which would introduce tougher restrictions on demonstrations in England and Wales.

Last year campaigners from Insulate Britain—who want the government to insulate every home in Britain in order to reduce energy use and carbon emissions—blocked the M25, the orbital motorway around London, and several other roads in order to make their point.

Extinction Rebellion (XR) also blocked bridges in central London in order to put pressure on the government to speed up its climate change agenda.

The blocking of roads cost businesses hundreds of thousands of pounds and some motorists took the law into their own hands and dragged protesters off the street so they could get through.

Home Secretary Priti Patel said on Monday the government is determined to stop protesters bringing Britain to a “grinding halt” and said, “The law-abiding, responsible majority have had enough of anti-social, disruptive protests carried out by a self-indulgent minority who seem to revel in causing mayhem and misery for the rest of us.”

Patel insisted the legislation would not erode the right to protest, which she said was a “fundamental right … that we all cherish dearly,” but would simply ensure that demonstrations were properly organised.

XR has threatened to bring “millions of people on to the streets” from Sept. 10.

Charlie Waterhouse, from XR, said, “It is foolish to think that announcing new curbs in the Queen’s Speech will stop people taking to the streets to demand their government act to ensure a safe future for people in the UK and around the world.”

He added: “Faced with a government incapable of anything other than a desperate attempt to shore-up its own power and cover-up its criminality, it is the only thing we can do. To be a bystander is not enough.”

In order to tackle the disruption caused by people gluing or handcuffing themselves to buildings and lampposts, the Public Order Bill would create new criminal offences of “locking on” and “going equipped to lock on” in order to cause “serious disruption,” with a maximum penalty of up to six months in prison.