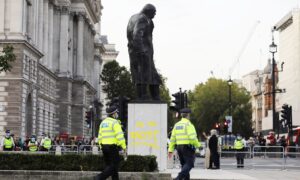 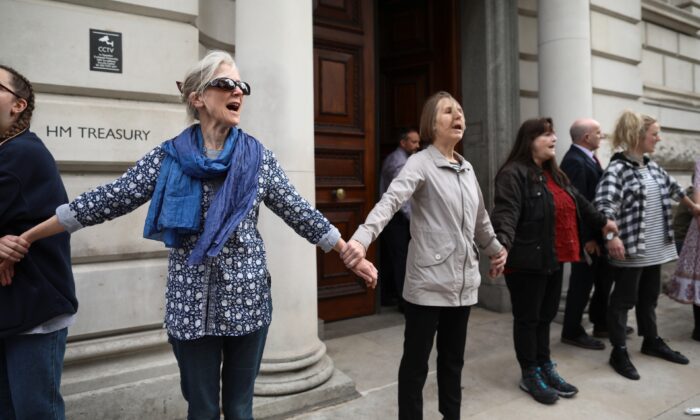 Environmental campaigners from the "Extinction Rebellion" group glue themselves together outside Her Majesty's Treasury as part of their ongoing actions and protests across the capital, in London, on April 25, 2019. (Dan Kitwood/Getty Images)
UK

More than £50 million ($68 million) has been spent on policing Extinction Rebellion (XR) protests since 2019, the Metropolitan Police said on Friday ahead of another round of protests planned by the environmental activist group.

Met Commander Rachel Williams said during a press briefing on Friday that the three events have cost the Met “in excess of £50 million.”

“I’m in no doubt this year’s policing operation will run into the millions and will result in many police officers sacrificing their time off to help mitigate any disruption and bring order and safety to the streets of London,” Williams told reporters.

XR has called for two weeks of civil disobedience starting from Aug. 23, to “disrupt the City of London to target the root cause of the climate and ecological crisis,” but it also said the disruption will last until the UK government agrees with its new demand, which is to “stop all new fossil fuel investment immediately.”

The Met said its officers are working with the City of London officers to develop a comprehensive policing plan.

Judging from previous experiences from XR demonstrations, and the fact that the protests are planned around the August bank holiday, which is usually busy for the police, “the scale and complexity of resources needed to respond will stretch across all areas of the Met,” the Met said in a statement on Aug. 20, adding that “specialist policing teams will also be on standby who can respond to and manage protesters in a safe manner who have built, or locked themselves to, complicated structures.”

Actor Stephen Fry on Friday shared a video from XR on Twitter, showing Fry voicing his support for the organisation and its plans.

XR activist Zoe Blackler told PA news agency on Friday that the sixth “Assessment Report” published recently by the United Nations Intergovernmental Panel on Climate Change (IPCC), which again argued in favor of the view that mankind’s emissions of CO2 were to blame for global warming, and recent scenes of flooding, have ignited more “public anxiety and desire for action.”

Home Secretary Priti Patel has previously said that XR, while claiming to be “an environmental rights campaign group,” continuously use “guerrilla tactics” with contempt, “seeking to grind the economic well-being of our nation into the ground under the pretence of tackling climate change,” and that the government “will not stand by.”

The government is also trying to pass legislation to put restrictions on protests, partly in response to XR protests.

But governments, including the UK government, mostly steer their policy on the assumption that greenhouse gas emissions are the main cause of climate change.

Prime Minister Boris Johnson has pledged to have the UK achieve “net-zero” by 2050, despite warnings that the plan is costly, would compromise grid security, and cause other environmental and social damages (pdf).

In contrast with the IPCC report, a new study published on Monday by a team of almost two dozen scientists from around the world concluded that previous studies did not adequately consider the role of solar energy in explaining increased temperatures.

Alex Newman contributed to this report.