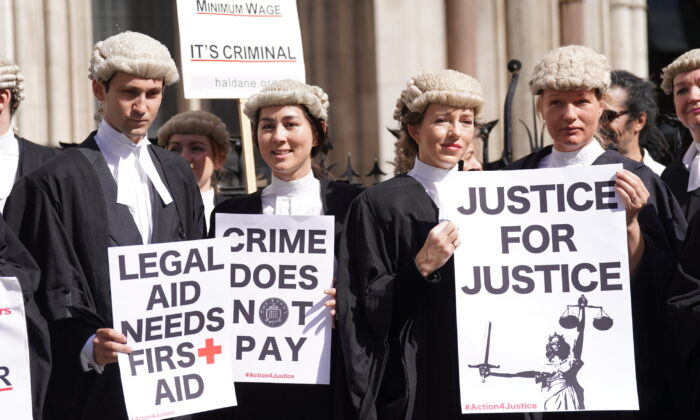 Criminal barristers in England and Wales have voted to escalate their pay dispute with the government and walk out in an all-out strike next month.

The Criminal Bar Association (CBA) started industrial action in June and have been on strike on alternate weeks since the beginning of August but they will commence an indefinite strike from Sept. 5.

The choice of date is politically significant as it is the date the Conservative Party leadership contest will be concluded, with either Foreign Secretary Liz Truss or former Chancellor of the Exchequer Rishi Sunak taking over as prime minister from Boris Johnson the following day.

While neither Truss nor Sunak have commented on the barristers’ strike during the leadership contest, whoever wins will come under intense pressure from civil servants, judges, and the police to settle the dispute so that criminal trials can resume.

The Independent reported that Ministry of Justice data suggested the first 19 days of action, between June 27 and Aug. 5, disrupted 6,235 court cases, including 1,415 trials, across England and Wales.

Among the cases that would be affected next month is a fitness to plea hearing in the case of Louis de Zoysa, who has been charged with the murder of Sgt. Matt Ratana at a police station in Croydon, south London, in 2020.

De Zoysa, who was severely injured in the incident, remains in hospital and there is a disagreement between the prosecution and defence teams about whether he is fit to face a trial.

But the Vice Chair of the CBA, Kirsty Brimelow QC, said last month that offer “doesn’t go near” resolving the dispute.

Brimelow told the BBC on Monday the all-out strike was a “last-resort action” and added: “The remedy is for an injection of money into the backlog of cases which currently stands at 60,000 cases, that barristers are working on that will cost the government only £1.1 million per month. Currently, it’s costing much more for the courts to sit empty.”

Raab, who has been deputy prime minister under Johnson, has backed Sunak for the leadership and is widely expected to lose his job in a Cabinet reshuffle if Truss becomes prime minister, possibly being dropped out of the Cabinet altogether.

A new justice secretary would no doubt be given the task by the new leader of ending the strike, which has had a crippling effect on courts in England and Wales, leading to even longer delays in the criminal justice system, which was already backed-up as a result of lockdowns.