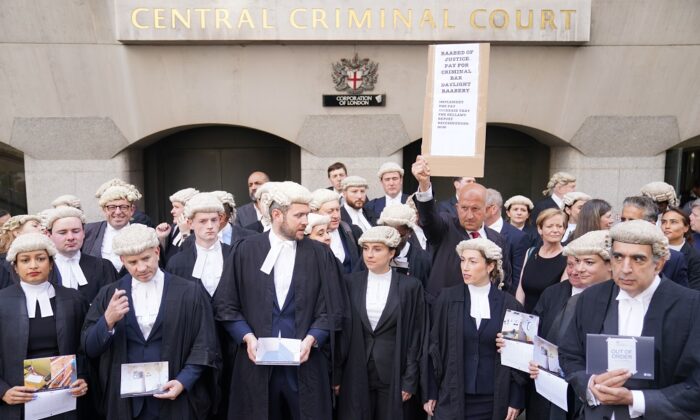 Lawyers from the Criminal Bar Association, which represents barristers in England and Wales, set up a picket line outside the Old Bailey in central London, on the first day of a strike over legal aid funding on June 27, 2022. (PA)
UK

Barristers Insist ‘Money Is There’ for UK Government to End Strike

One of the leaders of the union which has taken barristers in England and Wales out on strike has said the “money is there” for the government to solve the dispute and end the strike.

The Justice Secretary, Dominic Raab, has said barristers will receive a 15 percent pay rise for legally aided work from the end of September.

But the vice-chairwoman of the Criminal Bar Association (CBA), Kirsty Brimelow QC, said that offer “doesn’t go near” resolving the dispute, which has paralysed criminal courts around England and Wales for a second week.

Brimelow told Sky News: “The government actually isn’t offering 15 percent. What it’s offering is 15 percent which will reach barristers in around a year or two years’ time, because the increase would relate to new cases only.”

She insisted: “The money is there. The government saved £240 million [$292 million] on legal aid during the pandemic, and it’s also profited since 2010 by selling off the courts and reducing judges’ sitting days, it’s profited in over £200 million since then.”

Brimelow added: “Currently we have a backlog of about 58,000 cases, and so the concern of the criminal bar and one of the reasons why the criminal barristers are taking this action is because there just simply are unlikely to be sufficient barristers left in two years’ time.”

Brimelow pointed out one in four junior barristers had given up practising criminal law over the past five years as legal aid cuts dug into their incomes.

She said: “Legal aid has been slashed by 40 percent since 2016, and so the 15 percent doesn’t go anywhere near to reverse some of those cuts. It also doesn’t address the 23 percent collapse in barristers’ earnings during the pandemic.”

Raab has said the barrister strike is “regrettable” and would “only delay justice for victims.”

But the chairman of the CBA, Jo Sidhu QC, has blamed the government’s refusal to negotiate for the fact that “those victims of crime and defendants who want to prove their innocence won’t see their day inside court.”

Among the trials facing disruption is that of Sgt. Maj. Kirtland Gill, 40, a British Army soldier who was due to go on trial on Monday at Southwark Crown Court accused of selling or transferring ammunition, conspiracy to sell or transfer ammunition, and possession of a prohibited weapon.

The two-day strike began across England and Wales on June 27, and on Monday three days of industrial action begins, with the CBA threatening to down tools for an extra day next week.

The CBA said the turnout in its ballot on industrial action was 81.5 percent, and 53 percent of those who voted were in favour of a strike.