US Upgrades De Facto Embassy in Taiwan, Despite Beijing’s Objection 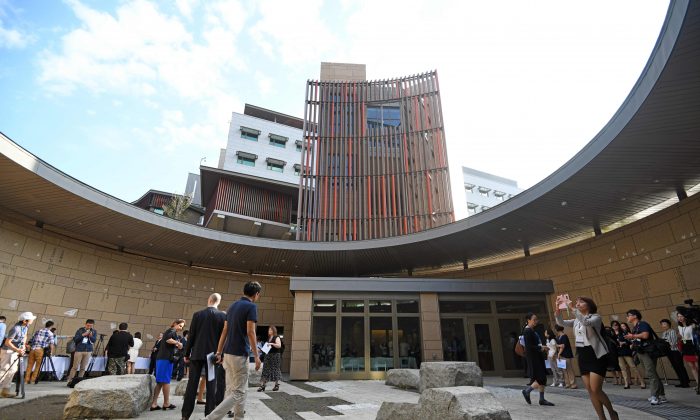 Journalists tour the new office complex of the American Institute in Taiwan (AIT) during a dedication ceremony in Taipei on June 12, 2018. - Washington on June 12 unveiled a multi-million-dollar new complex for its de facto embassy in Taiwan in what is hailed as a "milestone" in relations. (Sam Yeh/AFP/Getty Images)
By Paul Huang

The United States has unveiled a new $256 million, fortified building in Taiwan’s capital city, Taipei, to be used as its de facto embassy, at a time when the Trump administration has been gradually strengthening its ties with the democratic island nation against Beijing’s increasingly aggressive posturing.

Despite not having official diplomatic relations with Taiwan, the United States has maintained the American Institute in Taipei (AIT), which has been effectively functioning as the de facto U.S. Embassy since it was established in 1979.

The AIT performs most of the same functions as other U.S. embassies, including issuing visas. Though it legally exists as a private organization, it is staffed by career diplomats and other employees of the U.S. State Department.

Since 2009, the AIT began constructing a new site in Taipei’s burgeoning Neihu District, which spans about 16 acres and is a significant upgrade from the low-key military building that AIT previously used for decades.

The massive building is “a symbol of the close cooperation and enduring friendship between the United States and Taiwan,” said AIT Director Kin Moy at the opening ceremony.

For the opening of the new compound, the United States sent Marie Royce, the assistant secretary of state for educational and cultural affairs, as its highest attendee. Royce is the wife of U.S. House Representative Ed Royce (R-Calif.), one of the most outspoken supporters for strengthening U.S.–Taiwan ties in Congress.

“We have faced many trials along this journey, but we have risen to the challenge at every turn, knowing that our shared commitment to democracy would see us through,” said Royce, the highest-ranking State Department official to visit Taiwan since 2015.

Previously, it was reported that U.S. national security adviser John Bolton might attend the opening as a demonstration of U.S. commitment to Taiwan. Instead, Bolton traveled with Trump to attend the high-profile Singapore summit with North Korean leader Kim Jong Un.

“There’s actually a lot going on in the region today, and we need to respect that truth,” said AIT Chairman James Moriarty, alluding to the Singapore summit happening on the same day.

Observers speculated that sending a top official like Bolton to Taiwan could invite a strong reaction from Beijing, which considers Taiwan to be part of its territory. This is despite the fact that no U.S. or international law prohibits American officials, even the president, from traveling to Taiwan and meeting with Taiwanese counterparts.

Even so, China’s Foreign Ministry said they lodged “stern representations” with Washington about the new building and Royce’s attendance.

Taiwan President Tsai Ing-Wen attended the ceremony and said that as a free and open democracy, Taiwan has an obligation to work with others to defend shared values and protect joint interests.

“This day was years in the making so we can credit Bush, Obama, and Trump for following through on the facility,” said Rupert Hammond-Chambers, president of the U.S.–Taiwan Business Council. “There’s no escaping the fact that this is a significant symbol of the enduring US commitment to Taiwan.”

The Trump administration has been upgrading U.S. ties with Taiwan in the past year. In March, the State Department approved a longstanding request from Taiwan to solicit help from American companies in building the island nation’s own indigenous submarines.

A U.S. bill titled “Taiwan Travel Act” was passed unanimously by Congress and signed into law by Trump in March, which stipulates that the U.S. administration should conduct more high-level official exchanges with Taiwan.

That month, the United States also reassured Taiwan that it would continue to strengthen bilateral trade, commercial, and investment relations, after Beijing threatened to reduce trade with Taiwan amid ongoing U.S.–China trade disputes.

It remains unclear whether AIT’s new compound will be guarded by active service U.S. Marine Corps soldiers, which are a standard feature among all other U.S. embassies around the world.

Speaking to the press on June 12, AIT Director Kin Moy did not confirm or deny the rumor. However, the new compound is known to contain a building named “Marine House.” The presence of U.S. Marines could have significant political ramifications, as any attack on the compound and resulting casualties could be seen as an attack on the U.S. military itself.

Bolton has previously suggested relocating some U.S. military bases and troops from Japan’s Okinawa island to Taiwan, a move that some observers said would be viewed by Beijing as a provocation.

AIT’s new compound has been described as “fortified” and features a wide range of security mechanisms and designs. Taiwanese media United Daily News reported that key materials used in its construction were imported from the United States, and the buildings in the complex could withstand certain levels of attacks.