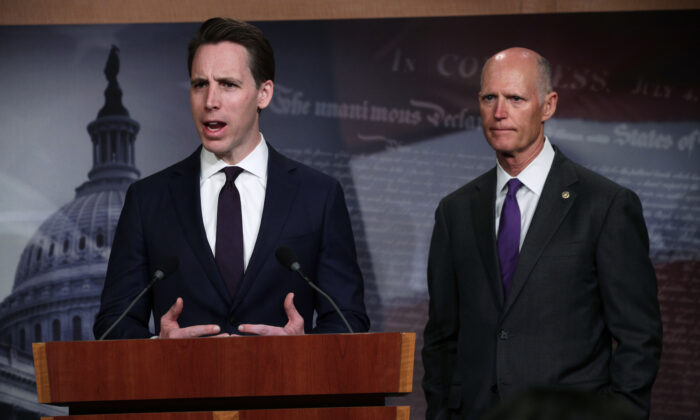 In a show of support to protesters in Hong Kong, three U.S. senators introduced legislation on Oct. 31 that would impose sanctions on Chinese officials responsible for suppressing freedoms in the city.

The “Hong Kong Be Water Act,” jointly introduced by Sens. Josh Hawley (R-Mo.), Rick Scott (R-Fla.), and John Cornyn (R-Texas), would call for the use of the Global Magnitsky Act to sanction Chinese and Hong Kong officials involved in curbing Hongkongers’ freedoms of speech and assembly.

The federal legislation authorizes the U.S. government to punish foreign violators of human rights by freezing their U.S.-based assets and barring their entry into the country.

The bill also condemns the Chinese regime for violating its obligations under its handover agreement with Britain, and calls for the freezing of assets of Chinese nationals and state-owned enterprises that undermine the “autonomy, basic liberties, and human rights” of the people of Hong Kong.

“Hong Kong is rapidly becoming a police state,” Hawley said in an Oct. 31 press release. “We must send a signal to the world that the United States will stand with Hongkongers as they stand up to the Chinese Communist Party.”

Since June, mass demonstrations have erupted on Hong Kong streets over fears that a now-withdrawn extradition bill could lead the Chinese regime to further its influence in the city. The protests have since evolved into a movement advocating for universal suffrage and greater freedoms.

Hawley explained that the term “be water” draws inspiration from the strategy that Hong Kong protesters have adopted in the recent months of demonstrations: to “move quickly and be fluid when confronted by police.”

Scott said the protesters are “fighting to regain the freedom they were promised by Communist China.”

Hong Kong reverted to Chinese rule in 1997 under the express guarantee that the city would retain a high degree of freedom and autonomy not enjoyed in the mainland.

However, activists and experts say that this pledge has gone unfulfilled, with Beijing escalating its encroachment into the city’s affairs in recent years.

Both Hawley and Scott made trips to Hong Kong in October and spoke with activists on the street.

“I heard horrible stories of police brutality, threats, and intimidation. As Americans, we cannot allow this to continue,” Scott said in the statement.

The House recently unanimously passed the Hong Kong Human Rights and Democracy Act by voice vote. The bill would require the U.S. administration to conduct annual review on whether Hong Kong is “sufficiently autonomous” from mainland China to retain its special trading privileges with the United States.

The Senate version of the bill is set for a floor vote at an undetermined time after being passed by the Senate Foreign Relations Committee.

On Oct. 23, Hawley also delivered a speech on the Senate floor urging for increased support of Hong Kong protesters.

“Sometimes in the course of history, the fate of one city defines the challenge of an entire generation. Fifty years ago that city was Berlin. Today that city is Hong Kong,” he said.

Hawley added that what’s at stake isn’t just one city.

He named the National Basketball Association and Apple—major U.S. corporations that have recently been criticized for putting profits ahead of free speech on the issue of the Hong Kong protests—as the latest examples of Beijing exporting censorship overseas.