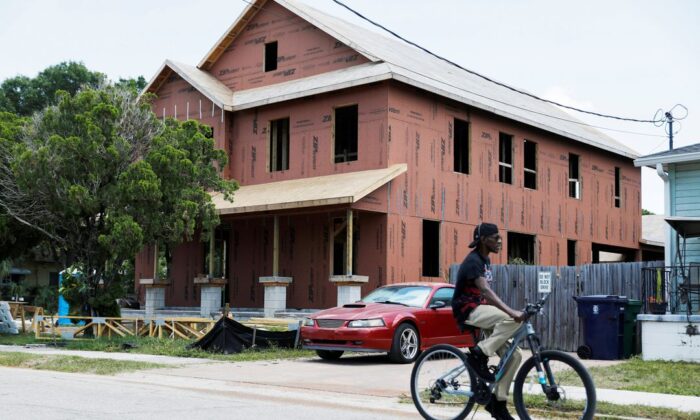 While building materials are in high demand, a new home is under construction in Tampa, Fla., on May 5, 2021. (Octavio Jones/Reuters)
US Real Estate

US Home Prices Rise in March, Building Permits Increase Due to Housing Shortage

Home construction in the United States rose in March 2022, but starts for single-family housing fell amid rising mortgage rates across the country, with residential construction marked by a severe shortage of houses.

Housing starts—an indicator of the number of private homes in a given period of time on which construction has begun—increased by 0.3 percent to a seasonally adjusted annual rate of 1.79 million units in March, according to the U.S. Commerce Department on April 19.

Single-family housing starts, which account for the majority of new home construction, fell 1.7 percent to a seasonally adjusted annual rate of 1.2 million units in March.

The market for single-family units fell not just in the Northeast, but in the West and the South, while rising in the Midwest.

Starts for multifamily housing with five units or more, which tend to be rentals, jumped 7.5 percent to a rate of 574,000 units, the highest since January 2020.

The Commerce Department’s report follows news on April 18 that optimism among single-family homebuilders fell to a seven-month low in April 2022.

February stats were revised upwards to a rate of 1.79 million units from the previously reported 1.77 million units.

Meanwhile, permits for future homebuilding increased 0.4 percent to a rate of 1.87 million units in March.

The average interest rate for a 30-year fixed-rate mortgage was 5 percent during the week ending April 14, the highest since February 2011.

This was up from 4.72 percent the prior week with further increases likely, according to Freddie Mac, as the Federal Reserve takes an aggressive monetary policy for the first time in over a decade to squash sky-high inflation.

The housing market sector is very sensitive to changes in the interest rates.

The Federal Reserve last month raised its policy interest rate for the first time in more than three years with an increase of 25 basis points.

It is assumed that the Fed will hike rates by a further 50 basis points in May and will slash its asset portfolio.

Inflated home prices combined with rising borrowing costs are pushing first-time homebuyers out of the marketplace.

Demand for rental accommodation has become strong since the market was disrupted by the COVID-19 pandemic.

Rents increased to a 20-year high on an annual basis in March, while the rental vacancy rate last winter was at its lowest levels since 1984.

Many home construction firms are blaming the higher mortgage rates and persistent supply chain disruptions for the slowdown in building.

The backlog of houses approved for construction yet to be started increased 2.9 percent, for a record high 280,000 units in March.

The massive backlog of unrealized residential construction projects combined with a low housing supply should continue to support the homebuilding industry for 2022.

Some analysts are concerned about the rising mortgage rates and higher prices slowing demand for housing, which could result in a surge in existing home inventory, leading to a bubble in supply.

Stocks on Wall Street were trading higher on April 19 with the dollar making gains, while U.S. Treasuries took a fall.