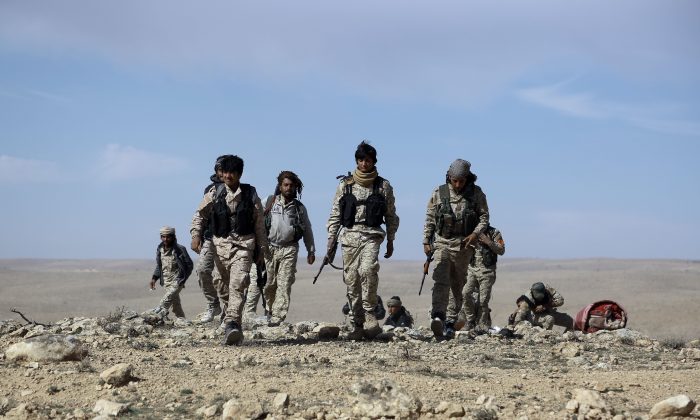 Fighters from the Syrian Democratic Forces (SDF), an alliance dominated by the Kurdish People's Protection Units (YPG), gather on the outskirts of the town of al-Shadadi, in Hasakeh Province, northeastern Syria, on Feb. 19, 2016. (Delil Souleiman/AFP/Getty Images)
Middle East

AMMAN/ANKARA—A car bomb attack by the Kurdish YPG militia killed two people and wounded five on Sunday in the northeastern Syrian town of Tel Abyad, near the Turkish border, the Turkish Defence Ministry said in a statement.

The Arab town, from which Turkish-backed forces last October pushed out the YPG militia in a major campaign spearheaded by the Turkish army, has seen a series of car blasts that have killed dozens of civilians.

“The perpetrator was captured alive along with another terrorist who came to the area with a bomb-rigged vehicle for a second attack,” the ministry said.

Turkey views the YPG as a terrorist organization linked to Kurdish insurgents on its own soil. The group was not immediately available for comment.

The Arab inhabitants of the area look at Ankara as their protector and accuse the Syrian Kurdish militia of forcibly pushing out the tribal population from these border area where they claim the YPG has sought to change its demography.

Kurdish-Led Forces Were Used as Wedge Between US and Turkey, Says Insider

The U.S.-backed Syrian Kurdish militia, which has seen talk of a potential withdrawal of U.S. troops under the Trump administration, refutes those claims and says Turkey has expansionist designs. It also defends policies that adversaries say discriminate against Arabs as redressing historic grievances as persecuted Kurds.