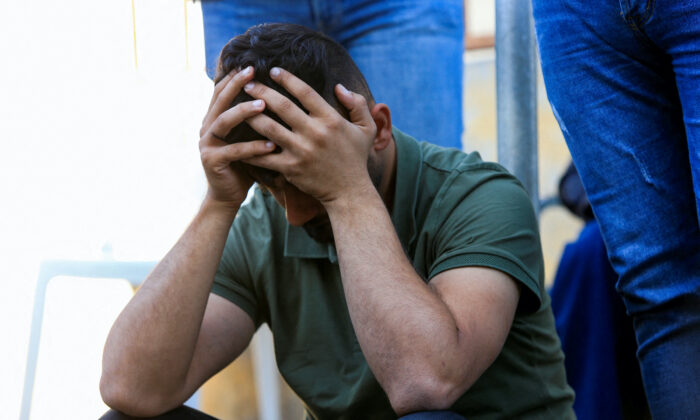 A man reacts near an ambulance transporting a coffin of his relative who was killed in what Iraqi officials claim was a Turkish attack on a mountain resort in Iraq's northern province of Dohuk, outside a hospital, in Dohuk, Iraq, on July 21, 2022. (Ari Jalal/Reuters)
Asia & Pacific

Turkey Rejects Claims of Attack on Civilians in Iraq’s Dohuk

ANKARA—Turkey has not carried out any attacks targeting civilians in Iraq’s Dohuk province, where a strike killed eight and wounded 23, and Iraqi authorities must not fall for this “trap,” Foreign Minister Mevlut Cavusoglu said on Thursday.

Turkey on Wednesday rejected claims by Iraqi officials and state media that it had carried out an attack on a mountain resort in the northern Dohuk province.

Iraq summoned Ankara’s ambassador to Baghdad over the attack and its state agency said the government will call back its charge d’affaires in Ankara.

Cavusoglu told state broadcaster TRT Haber the Turkish military operations in Iraq have always been against the outlawed Kurdistan Workers Party (PKK), saying the attack on Dohuk was also carried out by terrorists.

Turkey regularly carries out air strikes in northern Iraq and has sent commandos to support its offensives as part of a long-running campaign in Iraq and Syria against terrorists of the Kurdish PKK and the Syrian Kurdish YPG militia. Ankara regards both as terrorist groups.

Cavusoglu said reports blaming Turkey for the attack were attempts by the PKK to hinder Ankara’s counter-terrorism.

“The whole world knows we would never carry out an attack on civilians,” Cavusoglu said, adding the Turkish military had told his ministry that no such attack was carried out by Turkey.

“Following this attack, which we believe the (PKK) terrorist organization carried out, we are ready to hold talks with Iraqi officials. We can cooperate for the curtain of fog to be lifted. Until that is lifted, it is not right to blame Turkey,” he said.

The PKK took up arms against the Turkish state in 1984. More than 40,000 people have been killed in the conflict, which in the past was mainly focussed in southeast Turkey, where the PKK sought to create an ethnic homeland.

Dozens of Iraqis gathered on Wednesday outside the Turkish embassy in Baghdad to protest the attack. The top United Nations envoy to Iraq also condemned it and called for an investigation.

Cavusoglu said that while there were protests outside the embassy and other Turkish offices, there were no reports of damage or injuries.

By Tuvan Gumrukcu and Ece Toksabay