Deputy Police Chief: 'It's worth seeing over and over again'
0 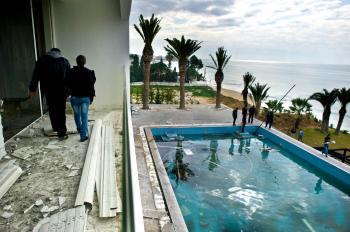 People walk on the balcony overlooking the pool as they visit the burnt and looted house that belonged to the nephew of ousted Tunisian President Zine El Abidine Ben Ali in Hammamet, some 37 miles southeast of Tunis, on Jan. 19. (Martin Bureau/AFP/Getty Images)
Africa

By Epoch Times Staff
Print
Tunisians have started to set to rights 23 years of financial bleeding by ousted President Zine El Abidine Ben Ali and his wife and relatives.

Looters throughout the country are ransacking the homes of relatives of deposed president Ben Ali and his wife Leila Trabelsi. One of Leila’s 10 brothers owned a villa in the upscale neighborhood of La Marsa in Tunis, NPR reports. The villa has been plundered by hundreds of angry people in recent days and now sits totally emptied, stripped, and ruined.

Leila Trabelsi is widely rumored to have taken 1.5 tons of gold from the central bank, worth $60 million, before she fled the country with her husband on Jan. 14.

The large Trabelsi family has infiltrated all essential parts of the Tunisian economy, such as the banks, media, real estate, and airlines.

The Tunisian Central Bank, to prevent more assets from leaving the country, took over control of a bank founded by the son-in-law of the ex-president, according to AP.

Tunisian prosecutors are getting support from international organizations to help convince France to block bank accounts. Transparency International (TI) France and two other organizations, the Arab Commission for Human Rights and SHERPA, filed a complaint on Jan. 17 with the French public prosecutor to assure the assets owned in France by both families cannot be transferred out of the country, said a TI press release.

“Only a legal order freezing such assets can guarantee that they are rapidly returned to Tunisian people. It is urgent to act now,” wrote TI.

Switzerland is already freezing Tunisian funds held in Switzerland by the ex-leader and 39 other individuals and organizations. The Swiss President and Foreign Minister Micheline Calmy-Rey on Friday said that the banks were already closely watching Tunisian activity and have seen some attempts to withdraw funds.

Tunisian television showed jewelry and gold seized during the arrest of family members on Wednesday. According to Reuters, 33 relatives were arrested on suspicion of crimes against Tunisia.

The unrest that started Dec. 17 in Tunisia has so far cost the country $2.2 billion, Interior Minister Ahmed Friaa said Monday.

After a month of protests successfully ousted the president, a hastily formed interim government now has to deal with protesters wanting to rid the country of the remnants of the Ben Ali regime. According to the constitution, elections have to be held within two months.

At the same time as freezing Tunisian assets, the Swiss cabinet also moved to freeze the assets of Ivory Coast ex-dictator Laurent Gbagbo, who has refused to step down from power despite losing presidential elections in November.