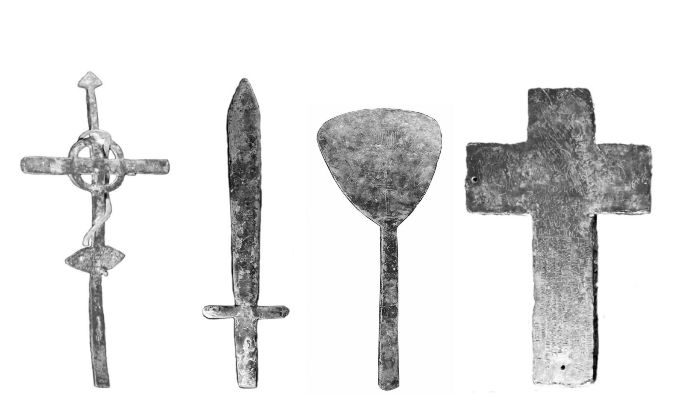 Tucson Artifacts Suggest Romans Made It to New World in 8th Century: Expert

At least 32 cast-lead artifacts, many of them crosses, were excavated from compacted soil in the Santa Cruz River valley outside Tucson. The make of the artifacts and their inscriptions suggest a colony of the Holy Roman Empire existed in the area in 8th or 9th century A.D., Yates said.

Contact between the Old World and the New World is conventionally held to have first occurred with Viking expeditions around the 10th century A.D. Suggestions of contact before this date—and the Tucson artifacts are not the only artifacts hailed as indications this was the case—have long been dismissed by mainstream historians.

The Tucson artifacts have been decried as fake. But Yates says no one with the proper credentials to assess them has called them a hoax.

On the contrary, Byron Cummings, who was the founder of the classics program and archaeology at the University of Arizona; and Neil Judd, who headed the Smithsonian’s excavations at Chaco Canyon, believed them genuine.

“To make that decision, you have to have credentials in certain areas—in medieval Latin and paleography (the study of ancient manuscripts) and epigraphy, which is the study of inscriptions,” Yates said.

“I’m a classicist, I have a Ph.D. in classical studies specializing in medieval Latin and paleography. I have a whole row of publications in that very, very tiny specialized area.”

He said another uniquely qualified person to study the artifacts was Wake Forest University Professor Cyclone Covey in the 1970s. “His position was always … [that] there’s nothing phony about them,” Yates said.

Covey wrote a book titled “Calalus” about the colony he believed left these artifacts behind. One inscription reads: “Calalus was an unknown land.”

The context of this inscription has led both Yates and Covey to conclude that Calalus was the name of a colony established by the Holy Roman Empire that clashed with the local Toltec Native Americans, referred to in the inscriptions as the “Toltezus.”

In 800 A.D., Pope Leo III crowned the Frankish King Charlemagne Holy Roman emperor, the first Roman emperor in the West since the fall of the empire in 476. The Holy Roman Empire, though officially Christian, was multi-ethnic and included Jews, pagan barbarians, and various nationalities scattered across France, Spain, Germany, and Italy.

“One of my professors like to say it was neither holy, nor Roman, nor an empire,” Yates said.

Some Jews from Babylon under Machir, prince of the Exile, were given a fiefdom in southern France, part of Charlemagne’s domain. These events are alluded to in the artifact inscriptions, which are in medieval Latin as well as Hebrew and some other languages.

Some of those who claim the artifacts are a hoax say the inscriptions were lifted verbatim from Latin textbooks in circulation in the 1920s.

Yates said the medieval Latin used in the inscriptions could not have been produced by a forger: “There were maybe three or four specialists in all of America who could recognize the unusual vocabulary and phraseology of Dark Age Latin and really appreciate it.” He said that the reporters at the time who called the Tucson artifacts a hoax “didn’t go to the right ones.”

Some of the phrases were relatively accessible, Yates said, but others certainly were not.

“Yeah, [the inscriptions] quote half of a verse from Virgil,” Yates said. “Well, everybody else did too. Virgil was used throughout the Middle Ages and was memorized by schoolboys.”

An example Yates gave of a word a modern hoaxer could not have come up with is urhe. This is a rare medieval Latin word for “ore.” Scholars before Yates who have studied the artifacts have mistranslated it as “city” urbe.

Yates gave another example of the nuances missed by critics: “They didn’t catch the fact that there are some biblical verses that came from the old Latin version of the bible used in the Middle Ages.” This version of the bible was only recently recovered, so would not have been available to a hoaxer in the 1920s, Yates said.

‘People Didn’t Really Want to Believe That They Were Real’

The excavation of the artifacts was conducted according to the highest standards of the time, Yates said, and was witnessed by officials from the University of Arizona.

Furthermore, he doesn’t see how they could have been planted: “They came from under four to five feet of caliche, which is compacted soil.”

He concluded: “I think—and I may be going off on a limb here—a lot of people didn’t really want to believe that they were real.”

The wealth of gold and silver deposits are the most likely reason for Calalus’s location, Yates said. It remains a coveted location to this day. If the Tucson artifacts are accepted as genuine, this could become the most important historical site in America, disrupting mining operations.

This could become the most important historical site in America, disrupting mining operations.

When asked if other evidence of a settlement in the area has been uncovered, Yates answered quickly and enthusiastically, “Yes, yes, it’s all over.”

“For instance, a few miles north of the site where the Silverbell artifacts [another name for the artifacts, as they were found off Silverbell Road] were uncovered is a place called Signal Hill. That’s an ancient, ancient site. It has petroglyphs, and walls, fortifications, it was obviously a lookout site,” He said.

A petroglyph of a letter “R” found on Signal Hill matches that on the artifacts, where it stands for “Romans,” Yates said.

Last month, Yates published a book titled “The Tucson Artifacts: An Album of Photography With Transcriptions and Translations of the Medieval Latin” and co-authored with Robert C. Hyde, a Minneapolis artist and photographer.

It is a catalog of the artifacts, professionally photographed with descriptions and translations. The Arizona Historical Society, which currently owns the artifacts, gave Yates and Hyde access and permission to catalog them. It is an important step in reviving a serious study of the artifacts, Yates said.

Hyde and Yates are working on another book to explain the context and connections to a broader audience. Hyde is preparing replicas of some pieces in wax and lead to settle the questions of how they were originally produced.

Yates is confident the meaning and importance of the artifacts will be understood eventually. “It will happen,” he said. “Maybe not in my lifetime, but it will happen.”