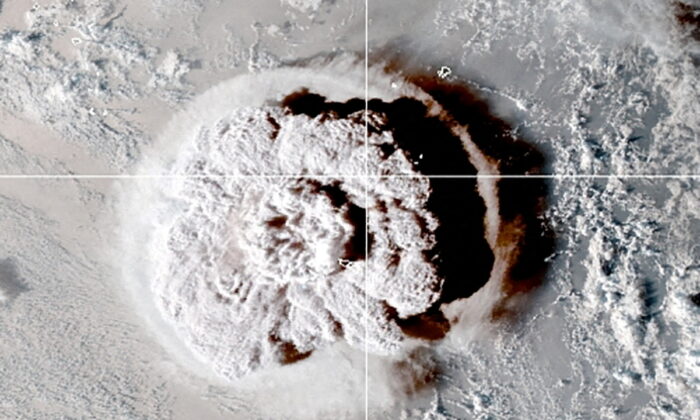 The eruption of underwater volcano Tonga, triggered a tsunami warning for several South Pacific island nations, and is seen in an image from the NOAA GOES-West satellite taken at 05:00 GMT, on Jan. 15, 2022. (CIRA/NOAA/Reuters)
Science

LONDON—The volcanic eruption in Tonga this month unleashed an atmospheric shock wave that radiated out at close to the speed of sound, pushing large waves across the Pacific to the shores of Japan and Peru, thousands of kilometers away.

Forecasting models and warning systems, designed primarily to assess earthquake-triggered waves, did not account for the boosting effects of the shock wave. It was a critical flaw in these systems, scientists said, leaving them unable to predict exactly when the waves would hit land.

The Hunga Tonga-Hunga Ha’apai volcano eruption triggered a tsunami that destroyed villages and resorts and knocked out communications for the South Pacific nation of about 105,000 people. Three people have been reported killed.

However Tongans were well equipped to deal with the tsunami. The small island nation is considered among the most prepared for natural disasters, with years of tsunami drills under its belt, and many people knew to evacuate to higher ground.

But for faraway Peru, for example, the lack of accurate information may have contributed to the death of two people who drowned in unusually high waves, as well as the catastrophic oil spill from a ship near La Pampilla refinery.

“We need to re-evaluate tsunami hazards for other volcanoes around the world,” Fritz said.

For example, the underwater volcano known as Kick’em Jenny is thought to pose only a regional tsunami risk to the neighboring Caribbean island of Grenada. But in fact “it may very well excite the entire Caribbean and Gulf of Mexico, and possibly even the Atlantic and global oceans, if a Tonga-type event were to happen”, he said.

Volcano-triggered tsunamis have been rare in modern history, and the shock wave from Tonga’s volcano was among the largest ever recorded, similar to the one produced by the 1883 eruption of Krakatoa.

Prior to the 2018 tsunami that followed the eruption of Anak Krakatau, a tsunami set off by a volcano had not happened in the ocean in more than a century. Rather, 90 percent of tsunamis are triggered by earthquakes.

As such, tsunami warning systems are programmed to prioritize seismic events, with scientists gauging risk by whether an earthquake magnitude is high enough—above 7.5 on the Richter scale—to cause a destructive tsunami.

Seafloor instruments also monitor for irregular changes in wave height, sending information by surface buoy and then satellite to a warning center for assessment.

The Pacific Tsunami Warning Center in Hawaii initially warned of dangerous waves within 1,000 kilometers (621 miles) of the Tonga eruption. However, their bulletin noted that “due to the volcano source we cannot predict tsunami amplitudes nor how far the tsunami hazard may extend.” Roughly 10 hours later, the warning was updated to include a possible threat to Peru—a surprising development given that the tsunami near Tonga was relatively small.

Tsunami waves, driven by gravity, travel at around 200 meters (660 feet) per second—roughly the speed of a jetliner. But the shock wave from Tonga’s volcano had moved at more than 300 meters (186 miles) per second and was so powerful, scientists said, that it caused the atmosphere to ring like a bell.

Through the transfer of this energy from the atmosphere to the ocean, the shock wave amplified ocean waves around the world, pushing them farther afield and accelerating their travel time—something tsunami warning centers weren’t equipped to handle.

Now, Fritz said, the possibility of atmospheric pressure waves needs to “be added to tsunami warning centers’ suite of modeling and forecasting tools.”