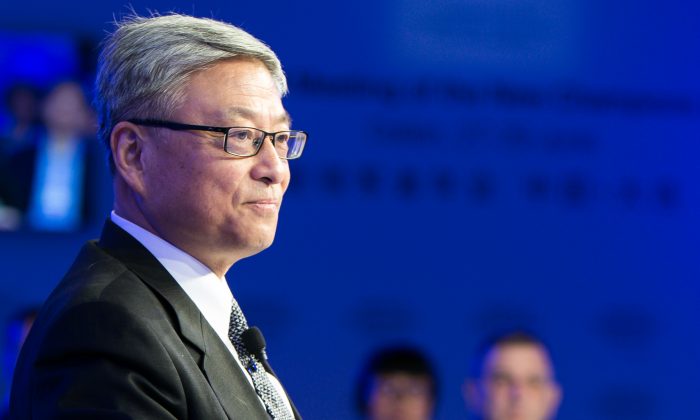 WASHINGTON—President Donald Trump’s new national security strategy has received praise from an unlikely source: a preeminent Chinese foreign policy scholar who is well-known in China for his writings on U.S.–China competition. He says Trump’s new strategy, if implemented, could quickly help to restore U.S. power around the globe and challenge China’s expansion.

The strategy paper, released last month, lays out the Trump administration’s plan to confront the “revisionist powers” of Russia and China. It has been widely perceived as especially targeting the Chinese regime, which the paper and many of Trump’s advisers and officials alike have described as the biggest threat to the national security and interests of the United States and its allies in the coming decades.

While the new strategy has been praised by many foreign policy experts, it has also received some partisan criticism. The New York Times, for example, called it “inward-looking and unpredictable.”

Among those who have praised the paper is Yan Xuetong, one of China’s most influential and well-known foreign policy thinkers and the dean of the Institute of Modern International Relations at China’s prestigious Tsinghua University.

The best minds among the adversaries of the United States might take Trump far more seriously than do some pundits and political opponents back home.

In a recent interview with China’s state mouthpiece Global Times, the veteran Chinese academic said that the developments of 2017 have partially confirmed a prediction he made in 2016 that Trump’s ascension to the presidency would intensify the growing conflict between the United States and China.

Having published numerous writings analyzing China’s foreign policy and its competition with the United States for global dominance, Yan has been described as China’s most influential foreign policy “realist,” someone who sees international order as being predominantly shaped by competition between great powers.

According to Yan, prior to Trump, the “establishment view” among the U.S. foreign policy community saw the maintenance of existing U.S. leadership around the world as naturally in the country’s best strategic interests. Such leadership, however, could become a costly endeavor without sufficient contributions from U.S. allies, as Trump has repeatedly argued. It could also mislead the United States into investing in what Yan often described in his academic writings as “superficial friendship” with strategic competitors—such as China—while ignoring intentions and actions that are fundamentally hostile to the United States.

The key difference between President Barack Obama’s and Trump’s strategies, according to Yan, is that Obama focused on maintaining “political leadership” around the world, while Trump sees economic dynamics and competition as the most important consideration.

Yan said that Trump sees the decline in U.S. national power as the most critical problem, and wants to reset the priorities of U.S. foreign policy toward boosting the domestic economy so as to ultimately strengthen the overall power of the nation. Such a view is not “isolationism,” as many Western critics have incorrectly labeled it, Yan said. Instead, it is a predictable strategy for dealing with the new challenges facing the United States in the era of globalization.

Yan has been described as China’s most influential foreign policy ‘realist,’ someone who sees international order as being predominantly shaped by competition between great powers.

The latest U.S. national security strategy paper represents an attempt at combining the old establishment view and Trump’s thinking, said Yan. While he agreed with many Western critics that Trump’s lessening commitment to U.S. allies could potentially become an “opportunity” for China to exploit, he nevertheless argued that the new strategy could become successful if implemented.

“If the Trump administration indeed makes policies according to the new national security strategy, it could quickly bridge the gap between the two different approaches, and could, therefore, lead the United States to restore its influence around the globe,” said Yan, in a passage omitted from the published English-language version of his interview.

In the same interview, Yan also implied it was inevitable that leaders like Trump would emerge in the West and spearhead a pushback against China’s expansion, because “the rise of great powers inevitably comes with strategic competition and conflicts of interest.”

Such pushback would not be limited to the “material aspect” but would also target the culture, values, and thoughts that China seeks to project in the West and elsewhere. The recent global backlash against China’s influence, according to Yan, was also inevitable and will likely spread to more countries in the year 2018.

A Tale of Two Yan Xuetongs

The fact that China’s preeminent foreign policy scholar holds Trump’s new strategy in such high regard is an indication that the best minds among the adversaries of the United States might take Trump far more seriously than do some pundits and political opponents back home.

There is at least one explanation for why Western observers of China have failed to take note of such a statement from perhaps China’s most influential foreign policy voice: Yan’s positive appraisal of Trump was not translated into English, or, more precisely, it was intentionally altered or censored in the process of translation, which would mislead Western readers.

It is not known why Global Times took the effort to partially censor the high-caliber interview with Yan when it decided to translate the story for publication on its English website.

There is evidence, however, that Yan, like many other veteran Chinese scholars and public intellectuals, purposefully feeds messages to Western reporters and readers that are totally different from what he actually says to his domestic audience.

Such deception is apparent in a long article recently published by The New Yorker magazine, in which Evan Osnos, an American writer highly critical of Trump, colorfully recounts how Yan shared a negative assessment of Trump with him personally over a private dinner of “dumplings, tofu, and stir-fried pork” in Beijing.

According to Osnos, Yan’s criticism of Trump went as far as telling him that “the United States will suffer [under Trump]” and that Trump is “America’s Mikhail Gorbachev,” who Chinese today generally believe was the leader who led to the collapse of the Soviet Union.

What Yan told Osnos may be compared to what Yan publishes on his personal Weibo (China’s equivalent of Twitter). There he posts regularly in the Chinese language for a domestic audience. He gives no hint that he thinks any less of U.S. President Trump than of other world leaders or the Chinese regime’s own foreign policy leadership.

On the contrary, Yan frequently warns his Chinese followers on Weibo that Trump’s pursuit of U.S. domestic revival and his unabashed adherence to the principles of realism in international relations could become serious obstacles for China in a wide range of areas such as U.S.–China trade, North Korea, Japan, Taiwan, and the Asia-Pacific region in general.

“What ultimately defines the relationship between a strong power and a weak power?” Yan asked his Weibo followers in a recent post, referencing a famous quote by ancient Greek historian Thucydides that states that the strong do what they can and the weak suffer what they must in the realm of competition between great powers.

“Only the strong define the relationship,” a Chinese Weibo follower replied, to which Yan then thanked him for pointing out the obvious.