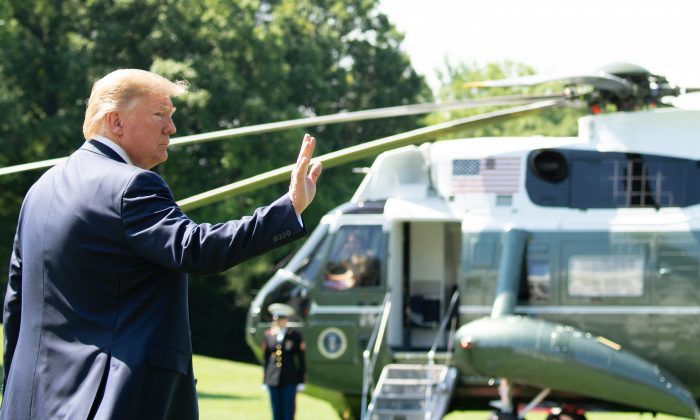 President Donald Trump walks to Marine One prior to departing from the South Lawn of the White House in Washington on June 22, 2019, as he travels to Camp David, Maryland. (SAUL LOEB/AFP/Getty Images)
Trump Administration

President Donald Trump said he will impose “major additional sanctions” on Iran after he stopped a retaliatory missile strike “from going forward at this time,” an indication his administration is taking a more diplomatic approach to increase pressure on the Islamic regime.

The added sanctions—to be imposed June 24—come as Trump said he hoped to make a deal with Tehran to bolster its flagging economy, an apparent move to defuse tensions following the downing of an unmanned U.S. drone by Iran.

“I look forward to the day that Sanctions come off Iran, and they become a productive and prosperous nation again—The sooner the better!” he wrote in multiple posts on Twitter.

Trump said in an interview with NBC’s “Meet the Press” that aired on June 23 that the United States is open to talks with Iranian leaders with “no preconditions,” and, at the same time, cautioned Tehran about “obliteration” if a conflict ensued.

“I’m not looking for war and if there is, it’ll be obliteration like you’ve never seen before. But I’m not looking to do that,” Trump told the network. “Look, you can’t have nuclear weapons. And if you want to talk about it, good. Otherwise, you can live in a shattered economy for a long time to come.”

He added that the proposed talks between the two countries were “not about the oil.”

Currently, more than 80 percent of the Iranian economy is under sanctions and the upcoming penalties “will be a further effort to ensure that their capacity not only to grow their economy, but to evade sanctions, becomes more and more difficult,” Secretary of State Mike Pompeo told reporters on June 23.

Tehran is already feeling the effects of existing U.S. sanctions, according to national security adviser John Bolton, who warned the Islamic regime on June 23 not to mistake “U.S. prudence and discretion for weakness.”

Tensions between Iran and the United States and its allies, including Saudi Arabia, have risen since Washington pulled out of a deal in 2018 between Iran and global powers that aimed to curb Tehran’s nuclear ambitions.

Iran has continued its terror-related activities ever since it was first designated as a state sponsor of terrorism in 1984.

Trump, in the NBC interview, was asked if he felt pushed into the conflict with Iran by any U.S. officials. He said in response that there are two groups of people in his administration, “I have doves and I have hawks.”

The president said he listens to all his advisers before making his own decision.

“John Bolton is absolutely a hawk,” Trump said. “If it was up to him, he’d take on the whole world at one time, okay? But that doesn’t matter, because I want both sides.”

On June 20, an Iranian missile destroyed a U.S. Global Hawk surveillance drone in international airspace, according to the Pentagon. Trump later said he had called off a retaliatory military strike at the last minute after being told it would kill 150 people, saying on Twitter that it “was not proportionate to shooting down an unmanned drone.”

In addition, Vice President Mike Pence told CNN on June 23 that the administration remains doubtful that the drone attack was authorized “at the highest levels,” of Iran’s leadership.

Iran said it may further scale back compliance with the nuclear deal unless European countries shield it from U.S. sanctions through a trade mechanism, the head of Tehran’s Strategic Council on Foreign Relations was quoted as saying on June 23.

“If Europeans don’t take measures within the 60-day deadline (announced by Iran in May), we will take new steps,” the semi-official news agency ISNA quoted Kamal Kharazi as saying.