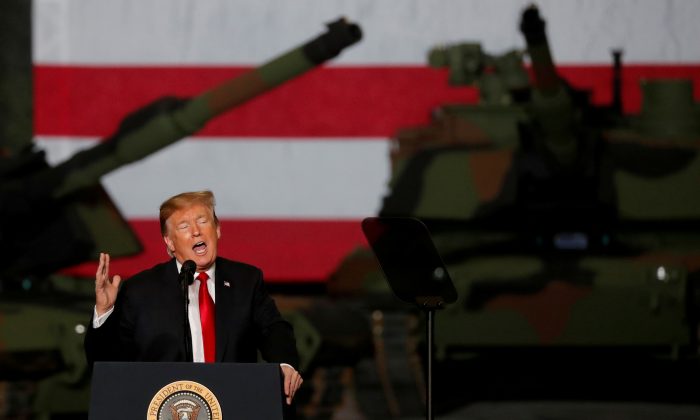 WASHINGTON—President Donald Trump warned on March 20 that the United States may leave tariffs on Chinese goods for a “substantial period” to ensure that Beijing complies with any trade agreement.

The stance could complicate U.S.-China trade talks set to resume next week, as Chinese officials have been pressing for a full lifting of U.S. tariffs as part of any deal, people familiar with the talks have said.

The face-to-face talks will be the first since Trump delayed a March 1 deadline to avert a rise in tariffs on $200 billion worth of Chinese imports to 25 percent from the current 10 percent.

“The deal is coming along nicely,” Trump said to reporters at the White House, adding that the China trip was intended “to further the deal.”

But when asked about lifting U.S. tariffs on Chinese goods, Trump said: “We’re not talking about removing them. We’re talking about leaving them for a substantial period of time because we have to make sure that if we do the deal, China lives by it.”

Trump did not elaborate on his plans for the tariffs. His negotiators have demanded that China agree to an enforcement mechanism to ensure that Beijing follows through on any reform pledges in any deal.

Washington is demanding that China end practices it says force the transfer of American technology to Chinese companies, improve access for American companies to China’s markets and curb industrial subsidies.

Later on Wednesday, during a speech in Lima, Ohio, Trump emphasized again that he wanted the United States to reach a “great” trade deal with China.

“We’re so far down, it’s got to be a great deal. If it’s not a great deal, you never catch up,” Trump said in remarks at a military tank manufacturing plant.