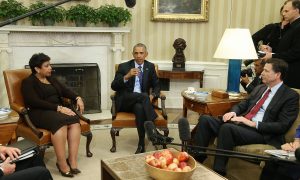 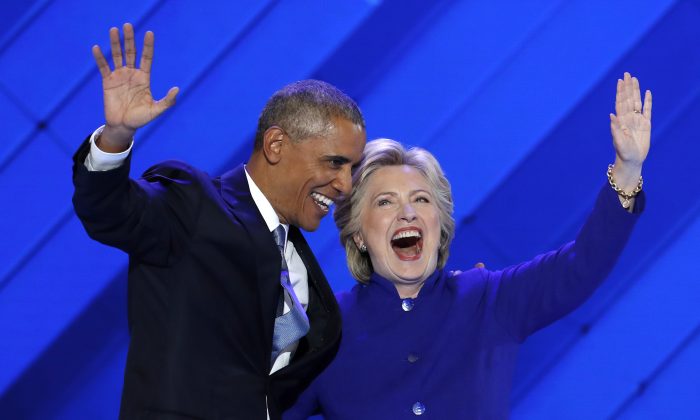 President Donald Trump said that links between Ukraine and the Hillary Clinton presidential campaign and the Obama administration should be investigated.

The remarks came after Ukrainian officials told The Hill that a January 2016 meeting between some of Ukraine’s top corruption investigators and members of Obama’s National Security Council, the FBI, the State Department, and the Department of Justice featured the Americans trying to divert the investigators from probing then-Vice President Joe Biden’s son’s links with Ukraine.

The Americans also tried to get Ukrainian investigators to locate evidence of crimes committed by Paul Manafort, a Republican operative who was later charged during the probe by special counsel Robert Mueller.

Kostiantyn Kulyk, deputy head of Ukraine’s prosecutor general’s international affairs office, said that investigators had evidence that a number of Western figures, such as Obama White House counsel Gregory Craig, also received money from the Party of Regions, the party of ousted Ukranian President Viktor Yanukovych, an ally of Russian President Vladimir Putin. Craig was recently indicted for allegedly lying about his dealings with Ukraine.

But American officials were only interested in one person, according to Kulyk.

“They just discussed Manafort. This was all and only what they wanted. Nobody else,” he told The Hill.

Nazar Kholodnytskyy, Ukraine’s chief anti-corruption prosecutor, said that he instructed investigators from Ukraine’s National Anti-Corruption Bureau not to release information about Manafort but that it was suddenly released after Manafort was named Trump’s campaign chairman in May 2016, two years after being obtained.

“Somebody kept this black ledger secret for two years and then showed it to the public and the U.S. media. It was extremely suspicious,” Kholodnytskyy said.

A Ukrainian court ruled in late 2018 that the release of information on Manafort amounted to an illegal attempt to influence the election in the United States.

Asked about the story on April 25 by Fox News‘s Sean Hannity, Trump responded: “It sounds like big stuff. It sounds very interesting with Ukraine. … I’m not surprised.”

Hannity asked whether America should see the information about Ukraine helping Clinton’s campaign through the Obama administration and Trump said yes.

“I think we do. And, frankly, we have a great new attorney general who has done an unbelievable job in a very short period of time. And he is very smart and tough and I would certainly defer to him. I would imagine he would want to see this,” he said.

“People have been saying this whole—the concept of Ukraine, they have been talking about it actually for a long time. You know that, and I would certainly defer to the attorney general. And we’ll see what he says about it. He calls them straight. That’s one thing I can tell you,” Trump added.

Prosecutors who brought charges against Craig, the former Obama White House counsel, focused on a Ukrainian businessman who was also a major donor to Clinton’s organization, the Clinton Foundation, The Epoch Times reported earlier in April.

“I just spoke to the new president a little while ago, two days ago, and congratulated him on an incredible race,” he told Hannity. “Incredible run. A big surprise victory. That’s 75 percent of the vote.”