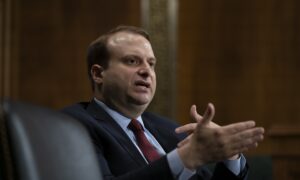 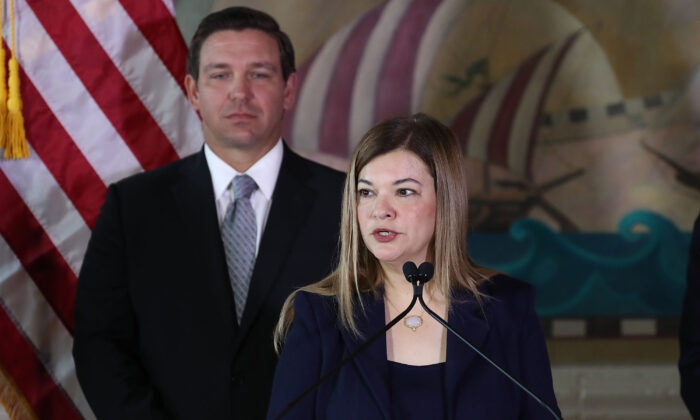 In a Jan. 9, 2019 file photograph, newly sworn-in Gov. Ron DeSantis stands behind Barbara Lagoa as she speaks after he named her to the Florida Supreme Court in Miami, Florida. Joe Raedle/Getty Images,)
Trump Administration

The confirmation of President Donald Trump’s judicial nominee Barbara Lagoa on Nov. 20 flipped another court to a GOP-appointed majority as Republicans continue what some hail as the president’s most impactful push continues.

With Republicans holding the majority in the Senate throughout Trump’s term, a raft of the president’s judicial nominees have been approved. The 11th Circuit Court is the third that has flipped during Trump’s term, following the 2nd and 3rd Circuits.

Trump nominees hold five of the 12 seats on the 11th Circuit, with two additional Republican-appointed judges on the court. Robert Luck, another Trump appointee, was confirmed to the court on Tuesday in a 64-31 vote.

The Senate confirmed Lagoa 80-15 on Wednesday. Both Lagoa and Luck were justices on the Florida Supreme Court.

There are now seven appeals courts with a majority of Republican-nominated judges out of 13 such circuit courts in the nation.

“This is a major achievement for his presidency,” said Carrie Severino, who runs the Judicial Crisis Network. “This success—along with the record number of federal appellate judges President Trump has appointed to date—is a testament to the tangible impact the president has had in reshaping the federal judiciary with constitutionalist judges who are committed to the rule of law.”

According to a tracker kept by the Heritage Foundation, Trump had made 162 judicial appointments by Nov. 14 of his third year, more than any of the five presidents preceding him.

Senate Majority Leader Mitch McConnell (R-Ky.) told attendees at a gala last week that Republicans would flip the 11th Circuit soon, telling them his motto is “leave no vacancy behind,” a riff on President George W. Bush’s “no child left behind” policy.

McConnell and Trump have repeatedly championed the judges who have been confirmed since Trump was elected. Some voters in 2016 went for Trump in large part because of the Supreme Court vacancy at the time, worried about the effect that a Hillary Clinton nominee would have, according to “The Great Revolt.”

“I’m very pleased that the Senate has confirmed 150 federal judges thus far in President Trump’s first term,” Sen. Lindsey Graham (R-S.C.) said in a statement in September after the 150th judge nominated by Trump was confirmed. “This is a historic milestone. These conservative judicial appointments will impact our nation for years to come.”

“As Chairman of the Senate Judiciary Committee, I will continue to push through highly qualified conservative judges at all levels of the federal courts,” said Graham.