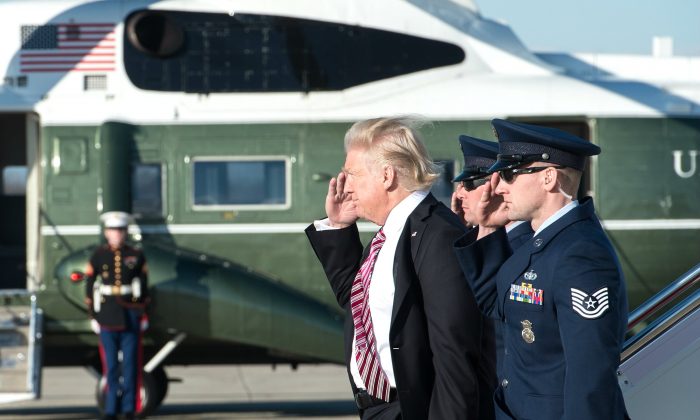 US President Donald Trump salutes as he steps off Air Force One at Andrews Air Force Base in Maryland upon his return from Philadelphia on January 26, 2017. (NICHOLAS KAMM/AFP/Getty Images)
Politics

Gives reporters a tour inside, some angry he didn't wave to the press
By Epoch Newsroom
biggersmaller
Print

President Donald Trump took his first trip on Air Force One on Thursday.

But some reporters and people noticed that he didn’t wave to the press, as was a tradition for presidents in the past. Some people and reporters expressed anger on Twitter, using it as another opportunity to attack the president.

He left Andrews Air Force Base for Philadelphia because he was slated to address the 2017 Republican retreat.

On CNN, a pundit noticed that he walked up the stairs to the plane and went in but didn’t wave. Longtime CBS reporter Mark Knoller also noted the same thing, saying the gesture is what “presidents have done for decades.”

Pres Trump boards Air Force One, but doesn’t turn around to wave – as presidents have done for decades. pic.twitter.com/pUOPtB0V0w

Trump boards Air Force One for the first time as POTUS for flight to Republican summit in Philadelphia – no wave pic.twitter.com/SNVvCiVTRk

President Trump gives reporters a quick look inside “beautiful” Air Force One: “This is a very special plane for a lot of reasons.” pic.twitter.com/HhaFzULbJT

“Classy… just watched Trump board Air Force One and didn’t turn around and wave,” wrote one user on Twitter.

But as he arrived in Philadelphia 20 minutes later, Trump gave a thumbs-up sign and waved as he descended.

The president also gave reporters a tour of Air Force One. One reporter asked him how his first flight was, and Trump replied: “Beautiful. Great plane.”

“This is a very special plane for a lot of reasons,” he added.