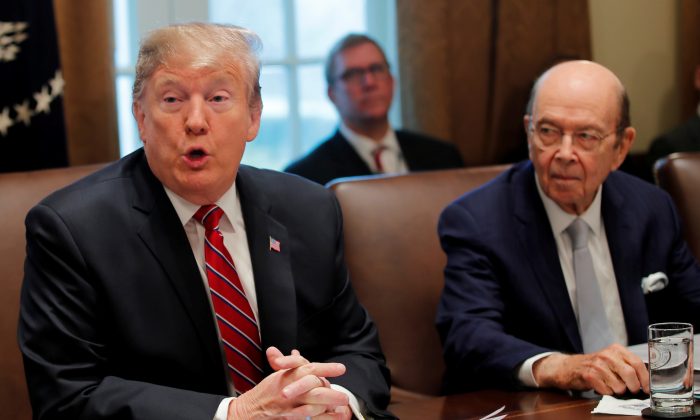 WASHINGTON/BEIJING—U.S. President Donald Trump said Feb. 13 that trade talks with China were “going along very well” as the world’s two largest economies try to resolve their seven-month tariff war ahead of a March 1 deadline for a deal.

U.S. tariffs on $200 billion worth of imports from China are scheduled to rise to 25 percent from 10 percent if the two sides don’t reach a deal by then, increasing pain and costs in sectors from consumer electronics to agriculture.

Trump told reporters at the White House his administration has a “big team of people, very talented people, over in China right now, negotiating on the China deal.”

Trump’s comments echoed those of U.S. Treasury Secretary Steven Mnuchin, who earlier told reporters in Beijing: “So far, so good,” when asked about the progress of talks.

Mnuchin, along with U.S. Trade Representative (USTR) Robert Lighthizer, arrived in the Chinese capital on Feb. 12 for meetings with Vice Premier Liu He, the top economic adviser to Chinese leader Xi Jinping, on Feb. 14 and 15. Deputy-level officials started talks on Feb. 11.

The two U.S. cabinet officials will meet with Xi on Feb. 15, the South China Morning Post reported, citing a source briefed on the arrangements. Representatives from the USTR’s office and Treasury could not immediately be reached to comment on the report.

Trump met with Liu at the White House when a Chinese delegation came to Washington for talks at the end of January.

Trump had said on Feb. 12 that the deadline for an agreement could “slide for a little while,” but he preferred not to do so. Trump added he expects to meet with Xi to close the deal at some point.

Trump’s advisers have described March 1 as a “hard deadline,” but Trump told reporters a delay was possible.

Speaking to Fox News on Feb. 13, White House Press Secretary Sarah Sanders said: “We’ll see what happens on whether or not the president makes a move to change the deadline.”

She also raised the possibility of a meeting between the leaders of the two countries, saying Trump’s personal retreat at Mar-a-Lago in Florida would make a good venue.

“It will ultimately take … President Trump and President Xi sitting down face-to-face figuring that out and getting that final deal because they are the only two that’ll ultimately be able to nail that down,” Sanders said.

Trump has said he did not expect to meet with Xi prior to March 1.

U.S. Department of Agriculture Deputy Secretary Stephen Censky said Feb. 13 that the two presidents were expected to meet “sometime in March,” but no dates were set.

“Hopefully they are going to be meeting and will be able conclude a deal,” Censky told a renewable fuels conference in Orlando, Florida. “Agriculture has to be part of it. It’s a necessary part of the deal.”

A growing number of U.S. businesses and lawmakers hope the tariff increase is delayed while the two sides tackle the difficult U.S. demands for major structural policy changes by China. They include ending the forced transfer of U.S. trade secrets, curbing Beijing’s industrial subsidies and enforcing intellectual property rights.

The latest round of talks in Beijing kicked off on Feb. 11 at the deputy level to work out technical details, including a mechanism for enforcing any trade agreement.

China’s Foreign Ministry referred questions on the talks to the Ministry of Commerce, which did not respond to a request for comment.

“From their point of view, they would have dodged a bullet,” Green, who was USTR’s top official at the U.S. embassy in Beijing until mid-2018, told Reuters.