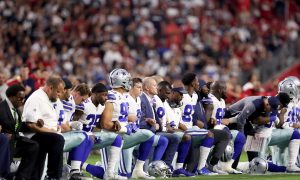 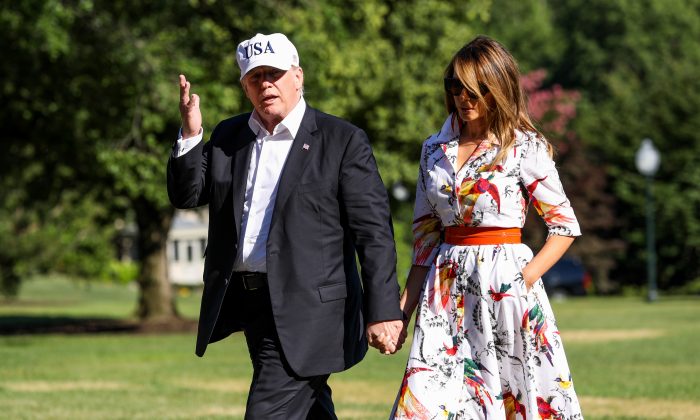 President Donald Trump expressed disbelief after the National Football League (NFL) suspended its ban on players’ kneeling during the national anthem. He also called on the league’s commissioner to put strict rules in place.

“The NFL National Anthem Debate is alive and well again – can’t believe it!” Trump said in a Friday evening tweet. “Isn’t it in contract that players must stand at attention, hand on heart? The $40,000,000 Commissioner must now make a stand. First time kneeling, out for game. Second time kneeling, out for season/no pay!”

The NFL announced on Friday it will shelve its May 23 policy that required players to stand while on the field during the national anthem. The rule will remain on hold while the league negotiates with the players union, said the National Football League Players Association (NFLPA), which filed a grievance against the anthem policy on July 10.

“In order to allow this constructive dialogue to continue, we have come to a standstill agreement on the NFLPA’s grievance and on the NFL’s anthem policy,” NFL and the union stated in a joint release. “No new rules relating to the anthem will be issued or enforced for the next several weeks while these confidential discussions are ongoing.”

The union argued it hadn’t been consulted on the rules and that they clash with the union contract. It proposed secret negotiations to the league “to find a solution to this issue instead of immediately proceeding with litigation.”

The rules required players to stand while on the field during the national anthem, but allowed them to stay in the locker room or in a similar location off the field until after the anthem has been performed.

The league was to fine clubs whose personnel didn’t stand and show respect for the flag and the anthem, with the league commissioner deciding the “appropriate discipline.”

“I think that’s good. I don’t think people should be staying in locker rooms but still, I think it’s good,” he told Fox and Friends on May 24.

Later he soured to it, saying at a rally in Montana that for the players to go into the locker room is “in many respects” worse than if they don’t stand.

He also ripped into NFL Commissioner Roger Goodell. “Where this guy comes from I have no idea,” Trump said, pointing to the contrast between the NFL’s falling ratings and Goodell’s new contract that, a source told ESPN, promises up to $200 million pay over five years.

NFL ratings dropped by about 10 percent last year—worse than the 8 percent drop the year before, Sports Illustrated reported.

The anthem policy was put in place after former NFL player Colin Kaepernick started to kneel in protest before games in 2016 while the anthem was playing. Some other players followed suit.

Trump has long criticized the players for choosing a form of protest that’s disrespectful to the country. He even suggested the players should be fired.

Kaepernick said his protest was over the plight of minority communities. He blamed racism.

The league decided to address players’ concerns by creating a program to help the communities that they feel are in need. Whatever the players donate, the clubs match. Together, they will decide how to use the money. ESPN reported in May that the funds amounted to $89 million.

Trump said the NFL and other league players could send him recommendations of people deserving clemency.