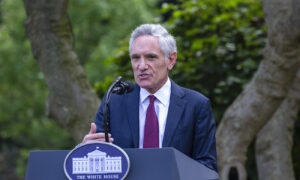 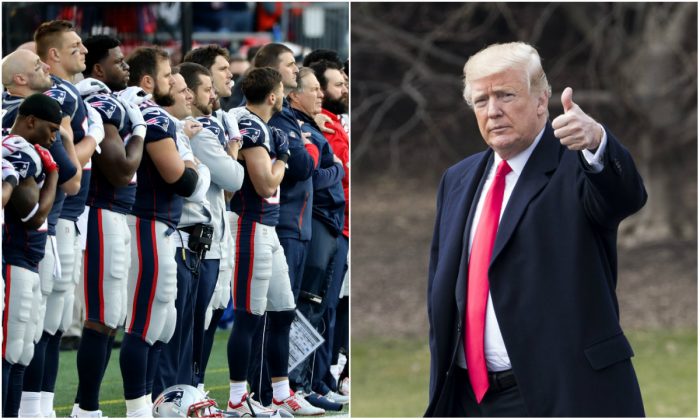 President Donald Trump praised the decision of NFL club owners to require their players to stand while on the field during the national anthem.

The NFL changed its policies regarding the national anthem on Wednesday.

“All team and league personnel on the field shall stand and show respect for the flag and the anthem,” reads a statement by NFL Commissioner Roger Goodell. “Personnel who choose not to stand for the anthem may stay in the locker room or in a similar location off the field until after the anthem has been performed.”

“I think that’s good. I don’t think people should be staying in locker rooms but still, I think it’s good,” Trump said.

The league will fine clubs whose personnel, including the players, don’t stand and show respect for the flag and the anthem, with the league commissioner deciding the “appropriate discipline.”

The discussion about the national anthem began with then-NFL player Colin Kaepernick in 2016 as he started to kneel in protest before games while the anthem was playing. Some other players followed suit.

Trump criticized the players for choosing a form of protest that’s disrespectful to the country. He even suggested the players should be fired.

Meanwhile, NFL ratings dropped by about 10 percent last year—worse than the 8 percent drop the year before, Sports Illustrated reported.

Trump said he didn’t believe he was the major force behind the NFL policy change.

Kaepernick said his protest was over the plight of minority communities. He blamed racism.

The league decided to address the issue by creating a program to help the communities that the players feel are in need. Whatever the players donate, the clubs match. Together, they will decide how to use the money. ESPN reported that the funds amount to $89 million.

“We’re proud of that support and we think that that’s how change is really going to be made,” Goodell said during a Wednesday press conference.

Goodell said the league owners talked to “tens if not hundreds of players over the last year or so to get their input, to understand their positions.”

The players union said that it hasn’t been consulted on the policy change. “Our union will review the new ‘policy’ and challenge any aspect of it that is inconsistent with the collective bargaining agreement,” it said in a Wednesday statement.