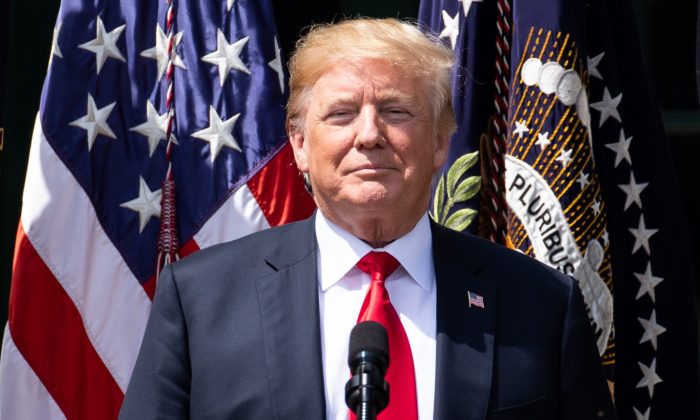 President Donald Trump participates in the Celebration of America on the South Lawn of the White House in Washington on June 5, 2018. (Samira Bouaou/The Epoch Times)
Trump Presidency

President Donald Trump extended an offer to the men and women of American sports leagues, asking for recommendations of people deserving a pardon. It is Trump’s latest response to the protests of league players, particularly in the National Football League.

Starting with then-NFL player Colin Kaepernick in 2016, some players went on to kneel in protest while the national anthem was playing before games. An oft-cited argument for the protests was that people from minority groups are mistreated by the justice system.

Trump previously criticized the players for choosing a form of protest that’s disrespectful to the country. He even suggested that the players should be fired.

Trump addressed the issue again when talking to reporters on June 8, before leaving for the G7 summit in Canada.

Trump said he would ask those who protested to name people they believe have been mistreated by the justice system and should be pardoned. “I understand that. And I’m going to ask them to recommend to me people that were unfairly treated—friends of theirs, or people that they know about—and I’m going to take a look at those applications, and if I find, and my committee finds, that they’re unfairly treated, then we will pardon them or at least let them out,” he said.

Trump’s move of putting critics in charge of the solution recalls his methods of handling environmental opposition to his golf courses, according to environmentalist Ed Russo.

Russo was the head of a local committee that tried to prevent Trump from building a golf course in Bedminster, New Jersey.

Russo’s tactic, one he used on other developers before, was to impose environmental standards so high they would be impossible to meet, thus scuttling the project.

Instead of fighting him, Trump put Russo in charge of the project and gave him unlimited authority to make the most environmentally friendly golf course he could. Russo then went on to repeat that for 20 Trump golf courses thereafter. He said it forced him to live up to his own standards. He later wrote a book about his experience, titled “Donald J. Trump: An Environmental Hero.”

A recent change in NFL policies requires players to stand while on the field during the national anthem, but allows them to stay in the locker room or in a similar location off the field until after the anthem has been performed.

“I think that’s good,” Trump said about the change. “I don’t think people should be staying in locker rooms, but still, I think it’s good.”

NFL ratings dropped by about 10 percent last year—worse than the 8 percent drop the year before, Sports Illustrated reported.

Trump said he didn’t believe he was the major force behind the NFL policy change.

The league decided to address the players’ concerns by creating a program to help the communities that the players feel are in need. Whatever the players donate, the clubs match. Together, they will decide how to use the money. ESPN reported last month that so far the funds had amounted to $89 million.