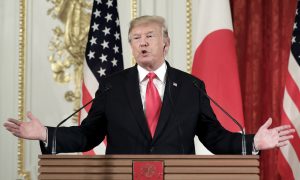 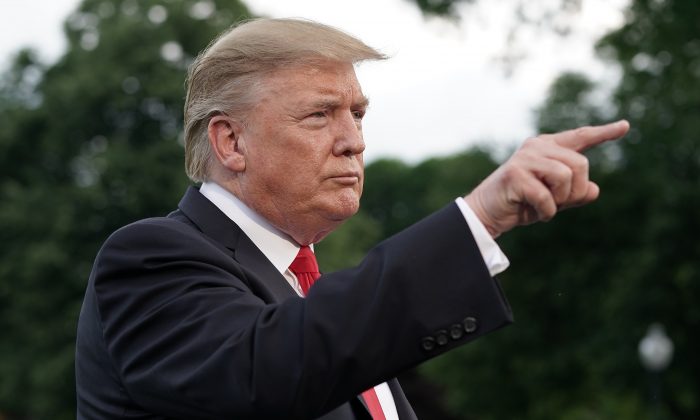 President Donald Trump talks to journalists as he departs the White House for a campaign rally in Pennsylvania May 20, 2019 in Washington. (Chip Somodevilla/Getty Images)
Trump Administration

Trump Calls for Banned Conservatives to Be Reinstated by Twitter

President Donald Trump called on Twitter to restore the accounts of conservatives who have been banned from the platform in recent weeks, continuing his longtime criticism of social media censorship.

In one post following a string of tweets on Mexico’s immigration deal, Trump cited freedom of expression and said the social media platform is making a major blunder with what he called the biased banning of accounts.

“Twitter should let the banned Conservative Voices back onto their platform, without restriction,” he said on June 9. “It’s called Freedom of Speech, remember. You are making a Giant Mistake!”

Twitter should let the banned Conservative Voices back onto their platform, without restriction. It’s called Freedom of Speech, remember. You are making a Giant Mistake!

Trump didn’t specifically name the conservatives he wanted to be reinstated, but he lamented previously about the account of actor James Woods who was banned in May, along with a number of other conservatives. At the time, Trump described the account bans as “very unfair” and accused social media companies of working with the “fake news media” and the Democrats.

A representative for Twitter told The Epoch Times in an email on June 9 that the company “[enforces] the Twitter Rules impartially for all users, regardless of their background or political affiliation.”

“We are constantly working to improve our systems and will continue to be transparent in our efforts,” they wrote.

The account bans prompted the White House in May to launch a survey asking people if they felt they were being discriminated against for their political views on social media platforms. The survey site, which has since been closed, now states that “too many Americans have seen their accounts suspended, banned, or fraudulently reported for unclear ‘violations’ of user policies.” The White House said they received thousands of responses.

The president, who has frequently used Twitter to communicate his ideas directly with his more than 60 million followers, met with Twitter CEO Jack Dorsey on April 23, saying they discussed a range of subjects. On the same day of the meeting, Trump wrote on Twitter that there were “big complaints from many people” about the censorship and noted that Congress should be involved.

In an interview with CNN last year, Dorsey said the majority of the company’s employees share a “left-leaning” editorial bias. In response to the censorship accusations, Dorsey said employees were trying to operate with impartiality.

“We need to constantly show that we are not adding our own bias, which I fully admit is left, is more left-leaning,” he told the network in August. “I think it’s important to articulate our bias and to share it with people so that people understand us, but we need to remove all bias from how we act, and our policies, and our enforcement.”

In undercover videos released by Project Veritas in January, multiple current and former Twitter employees indicated that the company censors conservatives and “shadowbans” people who express conservative viewpoints. Shadowbanning is the practice by social-media platforms of reducing or blocking the visibility of a user’s content.

At a hearing in April of the Senate Judiciary Subcommittee on the Constitution, Republican lawmakers accused Google, Facebook, and Twitter of discriminating against conservatives and of stifling free speech. The companies denied their platforms were politically biased.

“If we have tech companies using the powers of monopoly to censor political speech, I think that raises real antitrust issues,” said Sen. Ted Cruz (R-Texas), who chairs the subcommittee, at the hearing.