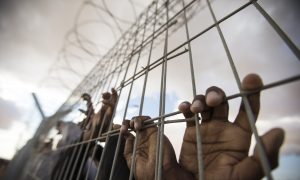 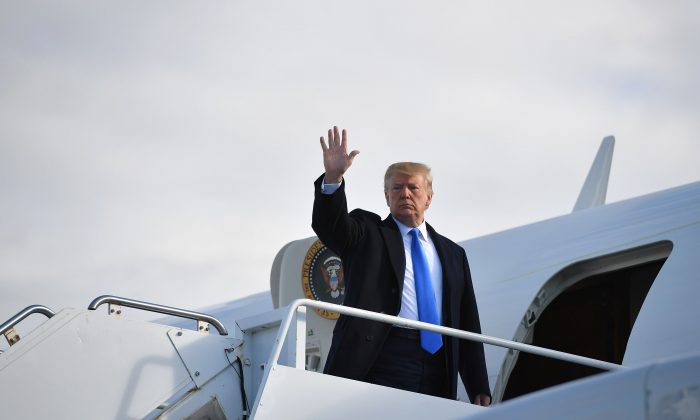 Trump: Additional Details on Mexico Deal to Be Announced at ‘Appropriate’ Time

President Donald Trump said that additional details on the immigration deal reached with Mexico will be released by his administration at the “appropriate” time, without elaborating.

He also denounced what he described as a “false” report from The New York Times.

In a string of early morning tweets on June 9, Trump disputed claims that the deal contained commitments already agreed upon with Mexico months before he signed it. The president was responding to a June 8 article from The New York Times that cited unidentified officials from both countries.

“Another false report in the Failing @nytimes,” Trump wrote. “We have been trying to get some of these Border Actions for a long time, as have other administrations, but were not able to get them, or get them in full, until our signed agreement with Mexico.”

Another false report in the Failing @nytimes. We have been trying to get some of these Border Actions for a long time, as have other administrations, but were not able to get them, or get them in full, until our signed agreement with Mexico. Additionally, and for many years,….

The agreement, announced by Trump on June 7, comes after three days of negotiations in Washington. It averts the 5 percent import tariffs that Trump had planned to impose on Mexico. In turn, Mexico agreed to take “strong measures” to stem the flow of illegal immigrants crossing the border, most of whom are traveling through Mexico from other Central American countries.

“Importantly, some things not mentioned in yesterday’s press release, one in particular, were agreed upon. That will be announced at the appropriate time,” Trump said in another post. “There is now going to be great cooperation between Mexico & the USA, something that didn’t exist for decades.”

…..not mentioned in yesterday press release, one in particular, were agreed upon. That will be announced at the appropriate time. There is now going to be great cooperation between Mexico & the USA, something that didn’t exist for decades. However, if for some unknown reason…

The White House didn’t immediately respond to a request for comment on the additional details.

In additional tweets, Trump described how for years Mexico had been uncooperative on the border, and expressed “full confidence” that Mexican President Andrés Manuel López Obrador will now get the job “properly done.”

The deal includes an expansion of the Migrant Protection Protocols program that sends migrants seeking asylum in the United States to Mexico while their cases are being processed. Mexico will also boost security on its side of the border, including the deployment of the National Guard.

The New York Times claimed the program’s expansion was agreed upon in December and that Mexico had already agreed in March to deploy its National Guard.

In May alone, border officials reported the apprehension of more than 132,000 illegal immigrants crossing from Mexico into the United States. The figure marked yet another increase over the previous month and the highest monthly level since 2006.

Trump also said that if Mexico severed its cooperation with the United States, “we can always go back to our previous, very profitable, position of tariffs,” though he added that he doesn’t believe a return to tariffs talks was necessary. As of May, officials said they had apprehended almost 600,000 illegal aliens on the southern border this fiscal year.

Meanwhile, Treasury Secretary Steven Mnuchin said the deal met Trump’s objectives of fixing the problems along the southern border and noted that he retains the authority to impose tariffs if Mexico fails to live up to it.

The influx of illegal immigrants has put a heavy strain on Customs and Border Protection. Border officials told The Epoch Times previously that migrant families in Texas were being transported to other sectors along the southern border by plane and bus, because of “capacity limitations.”

Mexican authorities have ramped up their efforts over the past few months to stem the tide of illegal immigrants. In May, authorities detained nearly 23,000 migrants on their side of the border, triple the number in January and about twice the monthly average in the first five months of last year.

Trump campaign spokesman Tim Murtaugh said in a statement that the agreement reached with Mexico gives the president the upper hand.

“In the face of naysayers, President Trump yet again delivered a huge victory for the American people,” Murtaugh said in a statement to The Associated Press.

Murtaugh applauded Trump for using “the threat of tariffs to bring Mexico to the table” and “showing that he is willing to use every tool in his toolbox to protect the American people.”

As part of the agreement, as many as 6,000 members of Mexico’s National Guard security force will be sent into Chiapas, a Mexican state bordering Guatemala, according to Reuters. Mexican Foreign Minister Marcelo Ebrard said that the deployment would start June 10.

Mexico will also take “decisive action” to dismantle human trafficking along the border, including their “illicit financial and transportation networks,” according to a joint statement from the countries released by the State Department on June 7.

It comes after the Mexican Finance Ministry said on June 6 that it blocked the bank accounts of 26 people for their alleged involvement in human trafficking. In a statement, the ministry’s Financial Intelligence Unit (FIU) said it froze the accounts due to “probable links with human trafficking and illegal aid to migrant caravans.”