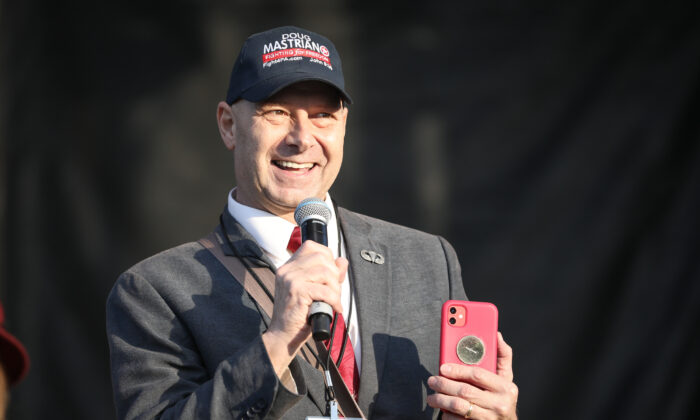 With 38 percent of the precincts reporting at 9:42 p.m., Mastriano received 40 percent of the vote and was projected as the winner by Decision Desk HQ.

The Republican Party of Pennsylvania declined to endorse a gubernatorial candidate in February. Former President Donald Trump decided to back Mastriano on May 14 at a time when the retired U.S. Army colonel and state senator already owned a comfortable lead over former U.S. Rep. Lou Barletta (R) and former U.S. Attorney Bill McSwain.

Trump had a significant presence in the race.

In April, Trump unofficially announced an anti-endorsement of the race, telling his followers not to vote for Bill McSwain.

McSwain served as the top federal prosecutor in Philadelphia for three years while Trump was president. He frequently promoted that connection on the campaign trail and sought the coveted Trump endorsement.

Trump pointed out that McSwain did not investigate the claims of widespread election fraud after Joe Biden won Pennsylvania in the 2020 presidential election.

“One person in Pennsylvania who I will not be endorsing is Bill McSwain for governor. He was the U.S. Attorney who did absolutely nothing on the massive election fraud that took place in Philadelphia and throughout the commonwealth,” Trump said in a statement.

“Do not vote for Bill McSwain, a coward, who let our country down. He knew what was happening and let it go.”

As a member of Congress from 2011 to 2019, Barletta was among the first elected officials to publicly endorse Trump during the 2016 GOP presidential primary. As mayor of his hometown of Hazelton, Pa., Barletta introduced an ordinance that punished businesses and landlords for employing or leasing to immigrants in the country illegally.

Ultimately, Trump gave his stamp of approval to Mastriano on May 14.

Trump describes Mastriano as “a man who will never let you down” and called him “a fighter like few others who has been with me right from the beginning, and now I have an obligation to be with him.”

If elected, Mastriano has said he would move forward with an initiative requiring residents to re-register to vote.

Not long after taking office as a state senator, Mastriano introduced legislation calling for a six-week ban on abortion. He has said he would not permit exceptions for rape, incest, or the mother’s health.

Concerned that Mastriano is too far right for voters in a general election, some more moderate Republicans in Pennsylvania mounted a last-second push to support Barletta.

On May 12, Pennsylvania State Senate President Pro Tempore Jake Corman called off his gubernatorial bid, supported Barletta. encouraged other candidates to follow his lead so Pennsylvania can elect a Republican “who can beat” the Democratic nominee in the general election.

Commonwealth Partners Chamber of Entrepreneurs spent approximately $13 million promoting McSwain. On May 15, the organization encouraged McSwain and White to withdraw from the race and give Barletta their stamp of approval.

Shapiro will be armed with a deep chest of money to combat whoever he faces. He entered 2022 with $13.4 million in his campaign account. That set a Pennsylvania record for a candidate heading into an election year.

The Philadelphia native is already anticipating Mastriano as his opponent. He is airing television spots comparing Mastriano to Trump and asking Pennsylvanians if they really want another Trump.

Mastriano, an Afghanistan and Iraq veteran, believes his America First platform is what’s best for Pennsylvania.

“The forces of darkness are hitting us really hard right now,” Mastriano told the Washington Post in April. “We’re going to bring the state back to righteousness, this is our day, our hour to take our state back and renew the blessings of America.”