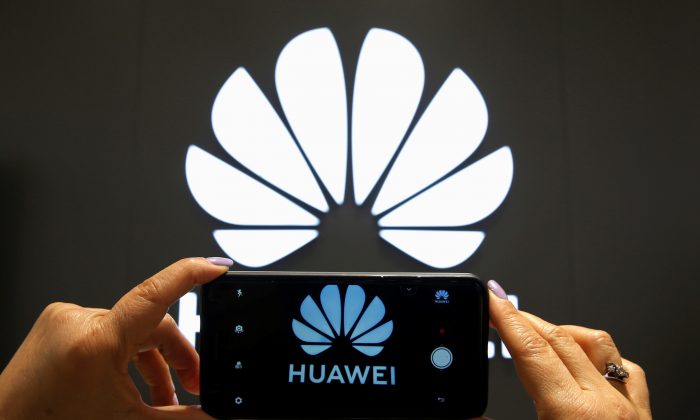 A Huawei logo is seen on a cell phone screen in their store at Vina del Mar, Chile on July 18, 2019. (Rodrigo Garrido/Reuters)
Trump Administration

WASHINGTON–President Donald Trump agreed at a meeting with the heads of top technology companies like Google on July 22 to make “timely” decisions on requests by U.S. companies to sell to blacklisted Huawei Technologies Co Ltd, the White House said.

But even as the CEOs of the companies “requested timely licensing decisions from the Department of Commerce,” the White House said in a statement that the executives expressed “strong support” for national security restrictions on U.S. telecom equipment purchases and sales to Huawei.

The meeting, previously reported by Reuters, was with the CEOs of Cisco, Intel Corp, Broadcom Inc, Qualcomm, Micron Technology Inc and Western Digital and Alphabet Inc’s.

The meeting comes at a time of lingering uncertainty over the future of U.S. companies’ ties to Huawei, the world’s largest telecommunications equipment maker. It was placed on a U.S. blacklist in May, with the government citing national security concerns.

U.S. companies were banned from selling most U.S. parts and components to Huawei without special licenses. But Trump said last month that sales could resume as he sought to restart trade talks with Beijing.

Clarity on what the new policy toward Huawei will be has been slow to emerge.

On Monday, executives expressed displeasure at Commerce Department Secretary Wilbur Ross, who also attended the meeting, for not providing clear guidelines on policy toward sales to the Chinese company, according to a person briefed on the meeting. White House economic adviser Larry Kudlow and Treasury Secretary Steven Mnuchin were also at the meeting, the person said.

Among the attendees was Micron Chief Executive Sanjay Mehrotra. In a statement, Micron confirmed he attended the meeting and said “policies that ensure open and fair trade on a level playing field are essential to ongoing U.S. technology leadership as well as economic growth throughout the world.” Huawei is Micron’s single largest customer and the company last month resumed shipments of some products to the Chinese firm.

Ross has said licenses would be issued where there is no threat to national security. Reuters reported last week that the United States could approve licenses for companies to restart new sales in a matter of weeks.

However, the Washington Post reported on Monday that Huawei secretly helped North Korea build and maintain its commercial wireless network.

That may bolster China hawks in the U.S. government who see Huawei as a real national security risk, over those who seek a more lenient policy to appease Beijing amid ongoing trade talks between the world’s two biggest economies.

The United States accuses Huawei of violating Iran sanctions and stealing American intellectual property, accusations Huawei denies. Washington has also lobbied allied governments to keep Huawei out of their 5G networks, arguing that the company’s equipment could be used to spy for the Chinese regime.

The White House said unfair international trade practices and 5G technology was also discussed at the event on Monday.

By Alexandra Alper and David Shepardson