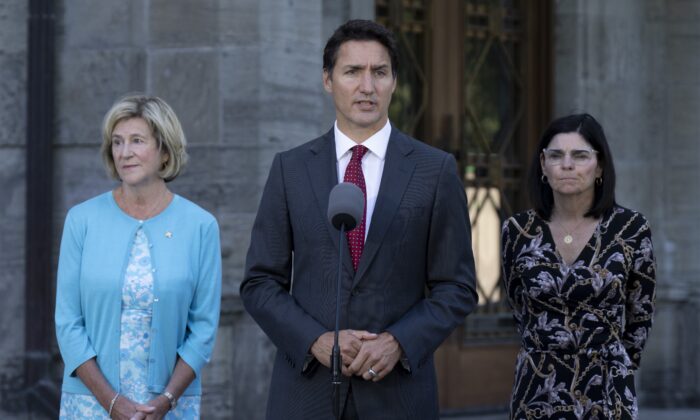 Prime Minister Justin Trudeau says that the solution to protect politicians from public confrontations is not necessarily to increase security around them, but rather to have more respect in the political arena.

“We’re examining how we might be able to offer more security, in a more structured fashion,” Trudeau said at Rideau Hall on Aug. 31 when asked by reporters if he was favourable to providing bodyguards to ministers.

But Trudeau added that the political climate has gotten “very toxic—online and directly” and needed to be tempered in politics as well as society.

“There’s a direct link with how debate goes on in Parliament even, and words that are spoken between and amongst politicians themselves,” he said.

Trudeau said all parliamentarians and leaders should denounce the hostility being directed at politicians and say “‘No, we are not going to become that toxic polarized country that some think we should become.’”

Conservative MP and finance critic Dan Albas reacted to Trudeau’s comments on Twitter, pointing to Trudeau’s past derogatory remarks towards the unvaccinated.

“Apparently oblivious to his own shameful role in all of this…” wrote Albas on Aug. 31 above a screenshot from a news article quoting Trudeau.

“Trudeau has referred to the unvaccinated as ‘racists’ and ‘misogynists’, even though a Statistics Canada study last April suggested groups most likely to be vaccine resistant are Blacks, Metis, Latinos, Arabs, people often wary of authoritarian governments,” says the article excerpt from the National Post.

The issue of the safety of ministers and other parliamentarians came to the forefront this week after a man in Alberta angrily confronted Deputy Prime Minister Chrystia Freeland who was visiting the province.

In a video posted online, the man can be heard shouting expletives at Freeland while saying she’s a “traitor,” and that she’s not welcome in the province.

The RCMP said this week it had opened an investigation into the incident, without specifying under which potential offence.

If the criminal threshold isn’t met, the RMCP said it would look at the issue from an “intelligence perspective,” likely meaning it would assess if the man could pose a threat to national security.

Trudeau himself was steadily harangued by protesters during last fall’s federal election campaign, and while attending events and meetings across the country since.

Trudeau made his recent comments after a minor cabinet shuffle at Rideau Hall.

Jaczek echoed Trudeau’s message and did not appear favourable to increasing security in order to maintain good contact with her constituents.

“I go shopping in my neighbourhood, and people recognize me, and it is one of the best connections that I have with my constituents,” she said.

“I don’t want to be intimidated in any way from missing out on those opportunities to relate directly to my constituents.”

Jaczek added that she’s also been subjected to verbal abuse, especially during the last election, but said she is determined to “just carry on.”