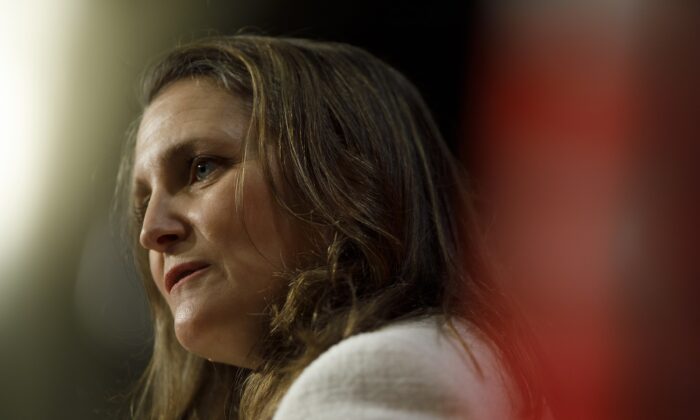 The RCMP says it is launching an investigation into the alleged verbal harassment of Deputy Prime Minister Chrystia Freeland by a man in Grande Prairie, Alb., last week.

In a video circulated online, a man confronts Freeland in a public building. He uses multiple profanities and calls her a “traitor” while asking what she’s doing in Alberta.

As Freeland enters an elevator, he tells her to get “out of this province,” while a woman alongside him adds that Freeland doesn’t “belong” in Alberta.

RCMP spokeswoman Robin Percival said in a statement that verbal assaults such as these can sometimes be illegal, but did not specify any specific offenses made by the Alberta man.

The RCMP said it can lay charges only if the criminal threshold is met, and, if it is not, that it can examine the man’s verbal altercation from “an intelligence perspective.”

Under RCMP regulations, MPs can receive RCMP protection in Canada and abroad as needed.

Public Safety Minister Marco Mendicino said during a press conference on Aug. 29 that the government is working closely with the RCMP to “offer protection not only to ministers, but to all MPs” and added that the security landscape is “becoming more and more complex.”

Prime Minister Justin Trudeau and multiple MPs spoke out against the incident involving Freeland, with Trudeau calling it “extremely disturbing.”

“This is not an isolated incident. Sadly, this is something we’re seeing more and more of,” Trudeau told reporters on Aug. 29.

“This kind of cowardly behaviour threatens and undermines our democracy,” he said.

Mendicino said that the man’s behaviour is “unacceptable.”

“We need everybody to call this out. This is not a partisan issue,” Mendicino said.

“We’re at a very sensitive juncture in our politics right now and we need to bring the temperature down,” he added.

Liberal MPs were also questioned over their role in lowering the political “temperature” during the press conference, with a reporter noting that, in the past, the government has called its opponents “racist or misogynist when there’s a disagreement.”

“We all have a role to play in lowering the temperature,” responded Liberal MP Karina Gould.

“I can relate because I’ve been the subject of so much online harassment and abuse,” Poilievre said in a video posted by BC reporter Rob Shaw on Aug. 28.

“My wife has received so much horrific material directly to her social media account that we’ve had to hire a private security firm to protect our family against all of that abuse.”

“Unfortunately, this is all too common,” he said.