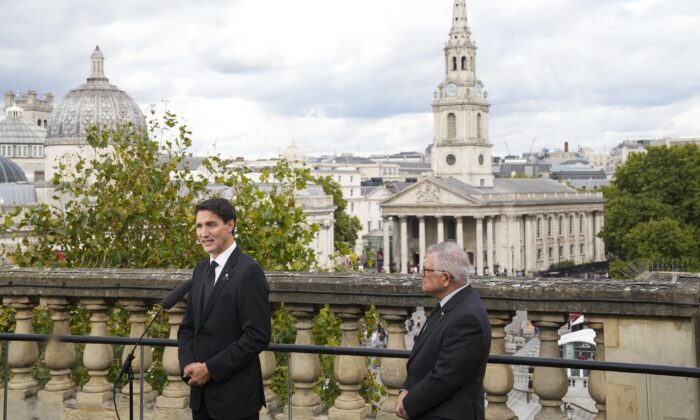 Prime Minister Justin Trudeau did not confirm nor deny whether he’s about to lift much of the remaining federal COVID-19 restrictions after several media reports predicted as much in recent days.

“Every step of the way through this pandemic we’ve been guided by evidence, by facts, by the best counsel of experts—international and across Canada—with the overarching priority of keeping Canadians safe, healthy, and making sure we’re caring for the Canadian economy and everyone’s general well-being,” Trudeau told reporters on Sept. 18 while in London for Queen Elizabeth’s funeral.

“As we look at the situation evolving, we will continue to make decisions that align with that and when we have things to announce, we will announce them.”

The possibility the Liberal government is about to drop restrictions was first reported in a Toronto Star column by Althia Raj on Sept. 16.

Citing anonymous sources, it said the mandate at the border for unvaccinated travellers could soon be removed, along with random testing. It also suggested the mandatory ArriveCan service could be cancelled.

The article said cabinet has yet to make a final decision on the matter.

The Toronto Sun corroborated some of the details on Sept. 18 in a column written by Brian Lilley.

“Discussions I’ve had over the past several days with industry, government and other sources point to a fluid situation where final details are still being worked out but, generally speaking, most measures will be gone by the end of September,” Lilley wrote.

He added the government would let the Order in Council imposing the restrictions expire—the same approach that was used with the domestic travel vaccine mandate.

While that mandate expired on June 20, the government’s messaging was that it was suspended for the time being but could be brought back if deemed necessary.

Lilley reported that ArriveCan could become optional instead of mandatory, and that there is no consensus on the masking requirement.

He said that Minister of Health Jean-Yves Duclos reportedly opposes dropping masks before Thanksgiving to assess the impact of holiday travel on transmission of the virus.

After the federal vaccine mandate was suspended in June, unvaccinated Canadians were permitted to take a plane from Canada, but are still subjected to testing and a 14-day quarantine upon return.

Unvaccinated foreigners cannot visit Canada, which has caused complications for many cross-border families and has impacted the tourism industry.

The federal government is facing legal action for the travel vaccine mandate and the imposition of ArriveCan.

There will be a hearing in federal court in Ottawa on Sept. 21 regarding the travel mandate lawsuits, with the government aiming to have them declared moot due to the June 20 suspension.

The applicants challenging the mandates argue the issue isn’t moot since the government has stated mandates could be brought back, and they also want the court to assess any potential breach of charter rights.

Cross-examination of government witnesses in late spring revealed that Health Canada did not make a direct recommendation for the imposition of vaccination and that the measure was used as a catalyst to drive vaccine uptake.

South of the border, the U.S. administration has changed its guidance and tone on COVID-19 in recent days, with President Joe Biden telling 60 minutes on Sept. 18 that the “pandemic is over.”

This follows a change in the guidance provided by the U.S. Centers for Disease Control and Prevention (CDC) on Aug. 11, with its recommendations no longer differentiating based on vaccinated status.

The meeting had the objective of enhancing collaboration between the countries “on cross-border law enforcement and cross-border travel,” said Mendicino’s press secretary Audrey Champoux in an Aug. 19 email, adding a read-out of the call would not be provided.

The U.S. also has a vaccine border mandate for foreigners and attempted to impose similar restrictions as Canada. Its vaccine mandate for businesses and mandatory masking on planes and trains were defeated in court.