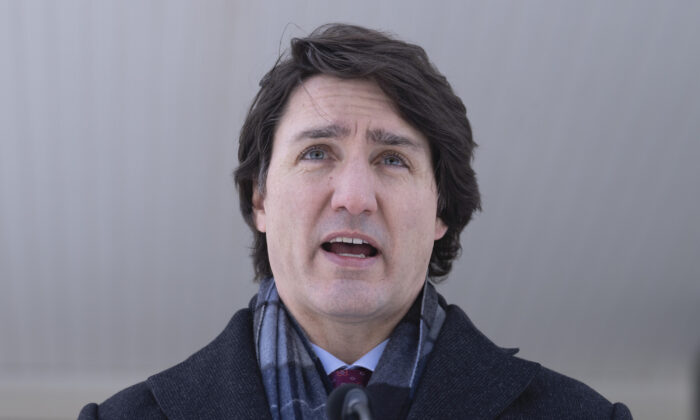 Canadian Prime Minister Justin Trudeau responds to a reporters question as he participates in a media availability held at a location in the National Capital Region which is not being made public for security reasons, on Jan. 31, 2022. (THE CANADIAN PRESS/Adrian Wyld)
Canada

Canadian Prime Minister Justin Trudeau today took aim at the ongoing trucker protest against COVID-19 restrictive measures that arrived in Ottawa over the past weekend, with trucks and supporters occupying the streets of downtown.

“Over the past few days, Canadians were shocked and frankly, disgusted by the behaviour displayed by some people protesting in our nation’s capital,” Trudeau said in a press conference on Jan. 31 from an undisclosed location.

Trudeau characterized the protestors as sporting “Nazi symbolism” and “rascist imagery” and accused the group of desecrating war memorials and engaging in other unruly and destructive behavior, despite repeated statements from organizers that they condemned such behaviour and vowed to remain peaceful.

The protesters seen on Parliament Hill for the most part have been carrying Canadian or other flags. No Nazi flags or signs were visible in the ongoing protests. Some images circulating on social media, however, showed Nazi or other hateful symbols on flags. Other videos on social media showed protestors telling those holding hateful signs to leave.

The protest, which attracted thousands of people, has remained peaceful despite some isolated incidents. In one event, protestors draped and put a mask on the Terry Fox memorial statue, though the items were removed within minutes. In another, protestors had parked on the steps of the National War Memorial and danced on the top of the Tomb of the Unknown Soldier. Another incident involved the staff of a homeless shelter who say they were harassed by protestors demanding food.

In his remarks on Jan. 31, the Prime Minister also criticized politicians who supported the movement, who he says are “exploiting people’s fears.”

“I ask you to think long and hard about the consequences of your actions,” he said.

Trudeau later commented, “This is a moment for responsible leaders to think carefully about where they stand, and who they stand with.”

Trudeau also said he would not be “intimidated” by the protesters, nor would he meet with them, since he has “chosen to not go anywhere near protests that have expressed hateful rhetoric, violence towards fellow citizens, and a disrespect, not just of science, but of the frontline health workers.”

When asked why in the past he has attended rallies of other groups on Parliament Hill such as Black Lives Matter, Trudeau responded that it was because he “agreed with the goals.”

“I have attended protests and rallies in the past when I agreed with the goals. When I supported the people expressing their concerns and their issues. Black Lives Matter is an excellent example of that.”

Before the press conference, Tory MP Dane Lloyd had questioned on Twitter how the weekend’s events were being portrayed in the media and called on Trudeau to “stop being dismissive” of the protestors.

“The double standard this weekend has been quite a sight to behold. This protest has been peaceful. I am thankful for the professionalism of the police and the PPS. It’s time for the Prime Minister to stop being dismissive and address the concerns of Canadians,” said Dane Lloyd, critic for emergency and preparedness.

Transport Minister Omar Alghabra has told CBC on Jan. 30 that something of the sort is in the works, but Trudeau would not confirm it, saying he didn’t want to speculate.

Trudeau, who had received his booster shot on Jan. 4, opened his address by announcing he tested COVID-19 positive that morning, adding that two of his children had also contracted it.

He said that protesters who want their freedom should just get vaccinated.

“Freedom means getting back to the things that they used to enjoy. And the way to be able to do that is to get vaccinated.”

The composition of the protesters in Parliament Hill appears to be diverse, with people of different backgrounds taking part. Three of the organizers holding a press conference on Jan. 30 noted that one of them is Jewish, another Metis, and another caucasian.

“You want diversity? Guess what, you have diversity right here. And we don’t care, because we’re just Canadian. That’s it,” said organizer Benjamin Dichter.

An Angus Reid poll released today suggests the majority of Canadians want pandemic restrictions to end, with 54 percent saying it’s time to end the measures and allow people to manage their own level of risk. The number of Canadians in favour of ending restrictions rose 15 percentage points, up from a similar poll conducted earlier this month that showed 40 percent in favour.