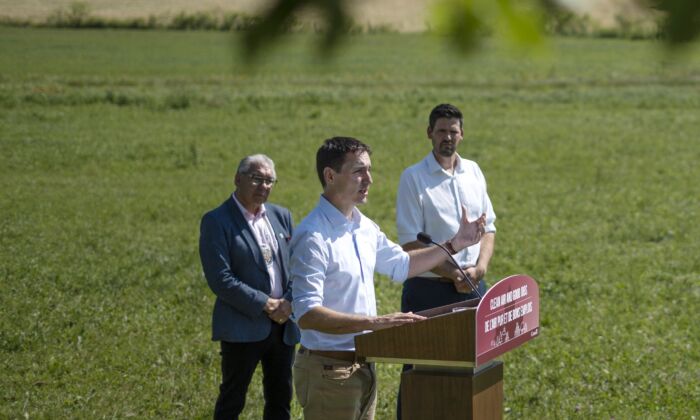 Prime Minister Justin Trudeau was in Halifax on Thursday to announce a new federal investment of $255 million for clean power in Nova Scotia.

“This is an investment that we’re making in the future of Nova Scotia by recognizing the work that has been done but needs to continue to be done on greening the grid here, and in ensuring good jobs and economic growth for everyone,” Trudeau said.

This investment is expected to provide Nova Scotia with one of the largest battery systems in North America, according to a Prime Minister’s Office statement.

The projects are part of a competitive process at the federal and provincial levels, hence the allocation and the exact amounts have yet to be confirmed.

The purpose of the investment is to reduce Nova Scotia’s electricity grid dependence on hydrocarbons. The province generates around half of its power from coal and a quarter from natural gas.

Nova Scotia seeks to have 80 percent of its energy needs covered by renewable sources by 2030.

Trudeau was at the other end of the country in B.C. at the beginning of the week, where he presented the expansion of the Oceans Protection Plan with $2 billion in additional funding. This was earmarked in the budget presented in April.

Similar to his remarks while in Bowen Island, B.C., on July 18, Trudeau’s comments in Halifax on July 21 included criticism of Conservatives’ approach to environmental policies.

“It just boggles my mind that Conservatives are having a debate over their leadership right now and they’re still arguing about whether or not we need to move forward on the fight against climate change,” he said, responding to a reporter’s question about what he’s doing to address the “climate crisis.”

“There’s very few people in this country who still think that you can have a plan for the economy without having a plan for the environment, and most of those people seem to be running for the Conservative leadership.”

Trudeau’s own dedication to reducing emissions was questioned by a Conservative MP from a riding that was visited by the prime minister this week.

Dan Albas, his party’s finance critic who represents the riding of Central Okanagan-Similkameen-Nicola, said events during Trudeau’s visit to the region seemed like they were used “strictly as photo-ops.”

Albas said venues frequented by the prime minister were not made public, he made no announcement, did not attend any fundraisers, and journalists were not allowed to ask questions and were reportedly threatened with eviction by police if they shouted questions.

“Photo-ops at considerable expense to taxpayers given the use of the Government private challenger aircraft that even flew the small distance between Kelowna and Penticton to assist with this visit,” Albas wrote in his weekly report.

“Many have pointed to the extravagance and excess of flying the short distance between Kelowna and Penticton, that was not only extremely costly to taxpayers, it also generates significant emissions from a Prime Minister demanding everyone else drive less and reduce their carbon footprint.”

The distance by road from Kelowna to Penticton is 60 kilometres. Albas speculated the prime minister perhaps flew to avoid car traffic that gets intense at rush hour.