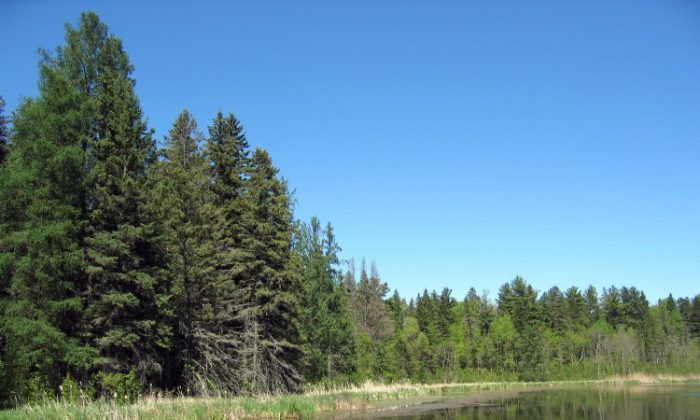 Trees may carry ions in water to the leaves and release them into the atmosphere, according to a new study. (Stephanie Lam/The Epoch Times)
Science

Trees May Electrify the Atmosphere

Trees not only provide our planet with oxygen; they also supply the air with charged particles or ions, suggests recent research from Australia.

The atmospheric ion concentrations of heavily wooded areas were found to be at least twice those of open grassy areas.

Natural ions in the air are generated by ionization, mainly via a trace gas called radon or due to radiation from space, according to study co-author Rohan Jayaratne.

Radon is produced during the decay of the radioactive element radium, which is constantly expelled from the ground where it is available in tiny amounts.

“Because radium is found in rocks and radon is soluble in water, ground water is particularly rich in radon,” says Jayaratne in a QUT news release.

“Trees act as radon pumps, bringing the gas to the surface and releasing it to the atmosphere through transpiration—a process where water absorbed by the root system is evaporated into the atmosphere from leaves,” explains Jayaratne.

“This is especially prevalent for trees with deep root systems, such as eucalyptus.”

The researchers estimate that trees in a eucalyptus forest, for example, may be responsible for up to 37 percent of the radon in air when transpiration rates were highest.

The findings have potential implications for the atmosphere, climate, and human health, although the ions’ role is not yet well-understood.

“We do know that approximately one-half of the particles that we inhale during normal breathing are retained in our respiratory system and it has been shown that charged particles were more likely to be deposited in the lungs than uncharged particles,” Jayaratne says.

“We do not believe that ions are dangerous—the danger comes from the pollutants,” he adds. “If there are no dangerous particles in the air to attach to the ions there is no risk of ill health.”

The study was published in the journal Environmental Science and Technology.