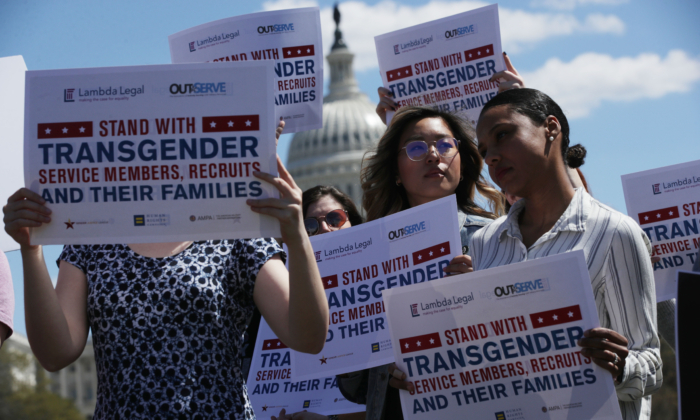 Activists participate in a rally at the Reflecting Pool of the U.S. Capitol in Washington on April 10, 2019. (Alex Wong/Getty Images)
US News

An Oregon court that granted the first individual legal recognition for his “non-binary” sex designation has rescinded the status and restored the sex on his birth certificate to “male.”

“I’m saying my experience should very much serve as a cautionary tale, to everyone, from males like me with sexual paraphilias and false beliefs about being women, to the lawyers, doctors, judges, therapists, and lawmakers that allowed this whole sordid tale to happen,” Shupe told The Epoch Times via email.

Paraphilias, according to WebMD, are “abnormal sexual behaviors or impulses characterized by intense sexual fantasies and urges that keep coming back.”

“The charade of not being male, the legal fiction, it’s over,” Shupe said.

“The lies behind my fictitious sex changes, something I shamefully participated in, first to female, and then to non-binary, have been forever exposed. A truthful accounting of events has replaced the deceit that allowed me to become America’s first legally non-binary person.

“The legal record has now been corrected and LGBT advocates are no longer able to use my historic non-binary court order to advance their toxic agenda.

“I am and have always been male. That is my biological truth, the only thing capable of grounding me to reality.”

Born in the nation’s capital in 1963, Shupe, who served in the U.S. Army from 1982 to 2000, has been married to his wife, Sandy, for three decades. He began identifying as a transgender woman in 2013 after experiencing harassment in the military because others thought of him as homosexual. He subjected himself to hormone treatment that had unpleasant, dangerous side effects, and legally changed his first name to Jamie and his sex to female. He didn’t undergo sex-reassignment surgery.

A few years later, he changed his legal sex again.

Shupe was celebrated by the LGBT movement and hailed as a courageous trailblazer by the mainstream media, but changing his legal sex and trying to live as a non-binary person didn’t solve his problems, he said.

“The gender transitions were supposed to fix my mental health problems, but I kept getting worse instead. The high-powered marijuana made me psychotic. I started hearing booming noises and having visions of being some Indian woman,” he told PJMedia. “I started believing I was some kind of chosen one who was picked to restore the third gender to North America, that’s what I thought the visions were telling me.”

Shupe said he latched onto the transgender identity as he tried to deal with psychological problems that should have been dealt with more conventionally.

“I ended up in the psych ward three times because of hormones. I had blood clots in my eyes because my estrogen levels were 2,585 instead of 200, low bone density, problems controlling my bladder, and emotional instability,” he said.

“Blood tests indicated I was dropping into kidney disease territory … for about 18 months, I had chronic dermatology issues and skin reactions to estrogen patches, I passed out on the kitchen floor from Spironolactone [a diruretic drug].”

Gay-rights public interest law firm Lambda Legal dropped him as a client, and Shupe changed his political perspective. Although he had supported transgender individuals serving in the armed forces, he came to embrace President Donald Trump’s policy that service members live according to their sex at birth.

Multnomah County, Oregon, Circuit Court Judge Patricia L. McGuire signed a “General Judgment Regarding Change of Name and Sex” on Dec. 19, 2019, changing his sex to male and his name to James Clifford Shupe.

“Despite six years of hormonal treatments, my sex was immutable, and I remained the same biological male I was at the time of my birth. In hindsight, my sex change to non-binary was a psychologically harmful legal fiction, and I desire to reclaim my male birth sex,” Shupe told PJMedia.