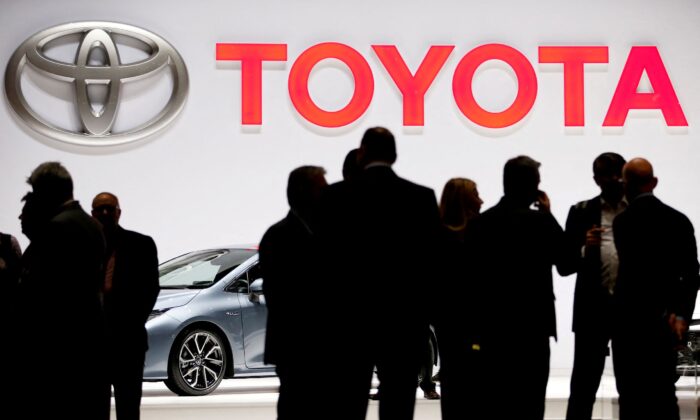 A Toyota logo is displayed at the 89th Geneva International Motor Show in Geneva, Switzerland, on Mar. 5, 2019. (Pierre Albouy/Reuters)
Companies

Toyota shares dropped 3 percent on Thursday after the Japanese carmaker reported a fall in operating profit for the quarter ended June, which fell short of expectations.

Operating profit plunged 42 percent, to ¥578.66 billion ($4.3 billion) in the quarter ended June, compared with ¥997.4 billion ($7.5 billion) in the year-ago period, Toyota said in its quarterly financial statement on Thursday.

The scale of the earnings hit was far beyond expectations—analysts polled by Refinitiv had estimated a 15 percent drop—and appeared to catch investors by surprise, resulting in the decline of the carmaker’s stock price.

Toyota, the world’s largest carmaker by sales, has repeatedly cut monthly output goals due to the global chip shortage and COVID-19 curbs on plants in China.

A Toyota spokesperson said the carmaker would be able to procure the chips that had hampered production and expected that the staffing shortages at some of its domestic factories caused by COVID-19 outbreaks would be resolved.

The company anticipated a production increase in the second half of the fiscal year, the spokesperson said.

Toyota, like other automakers, is dealing with increasing production costs and fears that global inflation will dampen consumer demand.

The company increased its full-year net profit forecast by 4 percent, to ¥2.36 trillion, aided by the weakening yen, which makes sales recorded in foreign currencies more valuable.

The automaker expects material costs for the full year to increase by 17 percent, to ¥1.7 trillion from its previous estimate—the majority of that from the rising prices of steel and aluminum—and cut its monthly production targets three times during the April–June quarter due to shortages of semiconductors.

“We were not able to produce enough, with customers globally waiting for their vehicles to be delivered,” the Toyota spokesperson said.

Toyota sold approximately two million vehicles this year, a reduction from the previous year’s sales of 2.1 million vehicles, although the waiting times have been extended owing to supply shortages and branch interruptions.

Toyota in Australia recently updated its website to reflect longer wait periods for the delivery of new vehicles.

“Toyota is experiencing longer wait times for new vehicle deliveries. We apologize to our customers and understand this is frustrating. We thank you for your ongoing patience,” Toyota Australia stated.