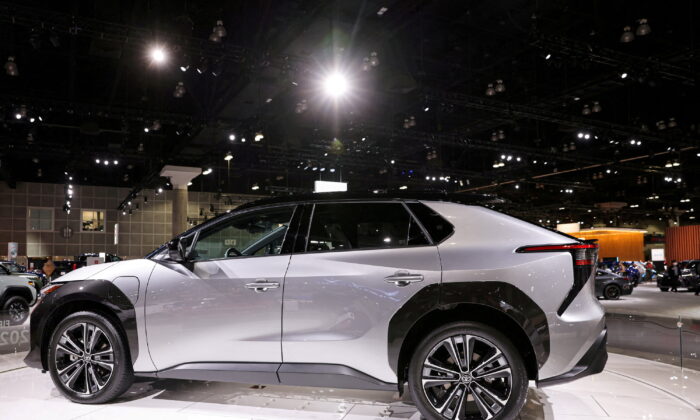 TOKYO—Toyota Motor Corp.’s global production for the first five months of 2022 fell 9.7 percent short of its own target on average, raising questions about whether the Japanese automaker will be able to maintain its current target for the year.

The world’s largest automaker by sales said it produced 634,940 vehicles in May, 5.3 percent fewer than in the same month last year and short of its target of about 700,000.

It was the third consecutive month that Toyota has missed its monthly goal.

The company has stuck to its target of a record 9.7 million vehicles for the year ending March 2023 but has floated the possibility that its production plan “may be lower.”

Toyota initially fared well during the global semiconductor crunch due to a large stockpile of chips but has repeatedly cut production this year due to shortages of key chips and components as well as supply disruption due to COVID-19 containment measures in China.

Toyota is likely to stick with its current annual target provided that no additional negative factors arise as it aims to make up for lost output in the latter part of the fiscal year, said Seiji Sugiura, a senior analyst at Tokai Tokyo Research Institute.

“It is not impossible to make 900,000 units per month, for example, in the second half of the year, so maybe there is still a place where it is thinking of making up for (the production) there,” he said.

For June, the automaker has twice downgraded its production target. The latest forecast is 750,000 vehicles, roughly 12 percent below its original estimate of 850,000.

The automaker has already called April-June an “intentional pause” in production to relieve the burden on its suppliers.

At home, production slumped by 28.5 percent in May but rose 4.6 percent overseas.

Europe was among regions where production increased because it was not hit as hard by the chip shortage.

Production also rose in countries including Thailand and Indonesia which were significantly affected by COVID-19 outbreaks last year.

Toyota in mid-April said it planned to produce 750,000 vehicles in May but soon lowered that by 50,000 due to COVID-19 lockdowns in Shanghai.