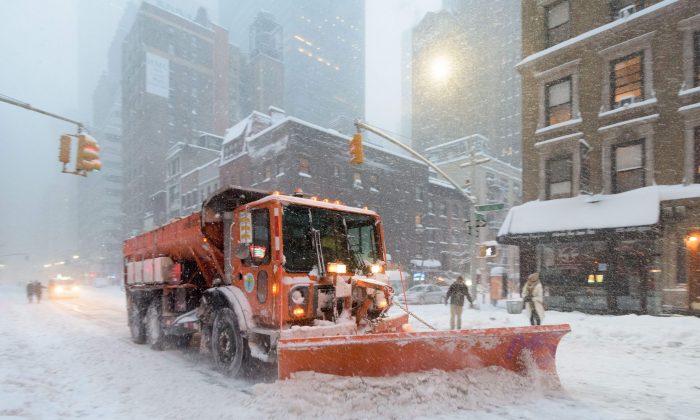 A snowplow clears snow on Lexington Avenue during the snowstorm in New York in a January 2016 file photo. (Francois Xavier Marit/AFP/Getty Images)
Businesses in COVID-19

Towns around Massachusetts are offering up to $310 an hour for drivers with a commercial license amid a labor shortage.

According to a “request for response from interested vendors 2021–2022” legal notice, Watertown is paying up to $200 for plow drivers with a commercial license, and the rates increase to $310 for those with specialized equipment, specifically a rubber-tired loader with 10-foot PLOW CAT 980 or equal.

Worcester and Lowell are also paying up to $155 an hour, while Sandwich is offering up to $135. Meanwhile, Chelmsford town is paying up to $110, and the Massachusetts Department of Transportation is also looking for drivers, although it is offering a lower rate of $31.25 per hour using their plow trucks, NBC10 Boston reported.

Jim Stanford, North Andover’s director of public works, told the Boston Globe this year’s hiring challenges are the worst he’s seen in his 30 years in the role.

“While they have the equipment, they’re struggling to get drivers to fill the need,” Stanford said. “So they can’t commit to the town, because they’re not getting commitments.”

Stanford said the situation has been further exasperated by rising gas prices and insurance requirements along with the fact that most cities and towns hire snowplow drivers through landscapers or other general contractors as opposed to hiring them individually.

“It’s going to take us too long to get all the routes, so we’ll have to let the superintendents know that we’re not ready for them to open,” Stanford said. “That’s really where the biggest fear comes from, from our perspective.”

The rise in wages come shortly after the Bureau of Labor Statistics’ latest jobs report revealed hiring difficulties may be on the horizon for U.S. firms amid a weak labor supply.

The participation rate is 1.7 percent lower than in February 2020, at the peak of the COVID-19 pandemic.

Meanwhile, multiple companies across the United States are continuing to implement attractive bonuses and competitive compensation in an effort to pull in new workers after the pandemic.

The ADP Research Institute Workforce Vitality Report (WVR) released Oct. 27 showed that third-quarter wages in the United States increased 3.3 percent, in line with growth in the months before the COVID-19 pandemic, while job switchers’ pay is up 6.6 percent since September 2020.