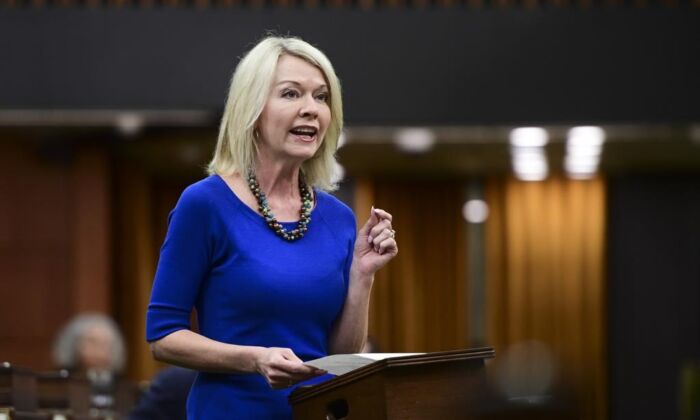 Interim Conservative leader Candice Bergen presented a motion today calling on the government to table a plan for the lifting of all federal mandates and restrictions while telling protesters encamped near Parliament Hill they’ve been heard and should leave.

“We believe the government must present a plan to quickly end the lockdowns and restrictions. Other countries are doing it. Provinces are doing it. And the Liberal government needs to do it,” Bergen said in the House of Commons on Feb. 10.

“The Prime Minister has used the pandemic to wedge, divide, and stigmatize Canadians. This must stop. As parliamentarians, we must all come together, work together, to transition to a post-COVID society as quickly as possible.”

Bergen also called on protesters to “remove the barricades and the trucks for the sake of the economy.”

“To the protestors here in Ottawa: You came bringing a message, that message has been heard,” she said.

“The time has come for you to take down the barricades, stop the disruptive action, and come together.”

The new position from the Conservative leader came with the promise that the party would “not stop until the mandates have ended.”

The Freedom Convoy protest has gripped Ottawa for the last two weeks, with protesters saying they will not leave until all restrictive COVID-19 measures are lifted. The protest has spread to other areas of the country as truckers block border crossings in Coutts, Alb., Windsor, Ont., and now in Emerson, Man., in support of the cause.

The Conservative motion states: “That, given that provinces are lifting COVID-19 restrictions and that Dr. Theresa Tam has said that all existing public health measures need to be ‘re-evaluated’ so that we can ‘get back to some normalcy’, the House call on the government to table a plan for the lifting of all federal mandates and restrictions.”

The motion, which has not yet been voted on, was debated for four hours by MPs, with some members of the Bloc Quebecois calling for a depoliticization of the issue by both Conservatives and Liberals, and some members of the NDP making pleas to consider public health as first and foremost.

“We need to be not using a political lens, but using a health care lens to make the decisions on restrictions,’ said NDP MP Heather McPherson.

Bloc MP Mario Simard said his party would support the motion but expressed some concerns about it.

“The conservative motion makes me feel like we’re trying to politicize people’s unhappiness. I understand that many Canadians are very displeased with the current situation. They’re all around me. They’re in my riding,” Simard said.

“The government should be held responsible for its decisions, yes. But the government didn’t create the pandemic. We should not try to capitalize politically on people’s discontent.”

If the Conservatives’ motion were to pass they would need the support of the Bloc as well as members of other parties. The Conservatives hold 119 seats in Parliament and the Bloc hold 32, while the Liberals have 159 seats and the NDP 25.