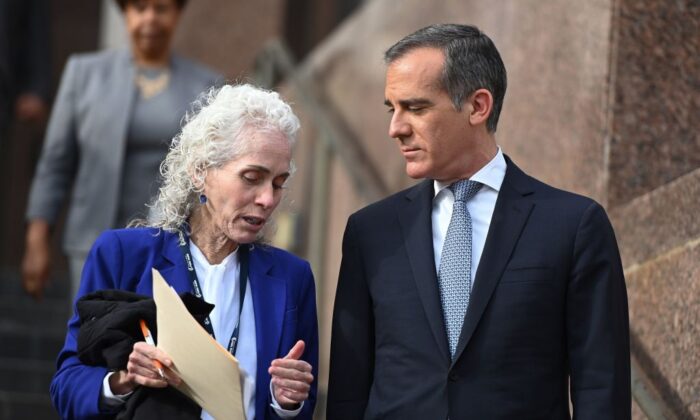 TORRANCE, Calif.—City officials recently passed a vote of no confidence in Los Angeles County Public Health Director Barbara Ferrer, saying that the restrictions she imposed during the COVID-19 pandemic violated people’s freedom and hurt businesses in the city.

The Torrance City Council voted 4–1 in favor of the item brought forward by Councilman Aurelio Mattucci on Aug. 9, with Councilmen Mike Griffiths voting “no” and Asam Sheikh abstaining.

Mattucci said Ferrer, as an appointed official, shouldn’t have excessive power over other people’s lives and that it’s important for the city to send her a message.

“The bottom line is that this individual, Barbara Ferrer, kept on overstepping our freedom, our freedom to be able to just get up and go to work and earn a living so that we can pay our bills,” he said during the meeting.

Mattucci said Ferrer’s regulation is “government overreach” and that individual cities’ situations should be taken into consideration. He also said the “stay home, save lives” ordinance that shut down businesses and stopped people from going to work has created financial issues for the city.

Torrance is currently ranked 24th among Californian cities facing the most financial distress by the California State Auditor’s Office.

On the other hand, Griffiths—the lone dissenting vote—said the motion is the city’s own overreach in commenting on an elected official.

“Where do we stop? Do say we have a vote of no confidence on the mayor? The sheriff? The governor?” he said.

Griffiths said he would rather send a letter to the Los Angeles County Board of Supervisors to express the council’s concerns about Ferrer’s decisions.

“Just because we disagree with their policies doesn’t mean we have to do votes of no confidence,” he said.

Despite some disagreements about the “no confidence” vote for Ferrer, the council unanimously passed a motion opposing the county’s future indoor mask mandate and business closure.

“I do fully support something that we can do as a city and that is to not enforce the mass mandate using our resources,” Mattucci said.

He said the motion is to ensure that residents and businesses won’t be affected by any future COVID-related restrictions.

According to the Centers for Disease Control and Prevention (CDC), the county moved into the “medium” virus-activity category on Aug. 9, when the average daily rate of people being admitted to hospitals for COVID-19 fell to less than 10—at 9.9—per 100,000 residents.

The county was thus able to escape the “high” category, which it entered in mid-July, raising the possibility of another indoor mask mandate. The county ultimately opted against the new mandate, citing steadily improving infection and hospitalization numbers.

Masks are still required in some settings, including health care facilities, homeless shelters, aboard transit vehicles, and at transit centers, along with correctional facilities.

“While we are thankful to see our county move to the medium community level, because we know that getting infected causes disruptions at the workplace and in the family and for some, becoming infected leads to debilitating illness, we advise caution, and ongoing use of a sensible approach for reducing the risk of exposure and preventing severe illness,” Ferrer said in an Aug. 12 statement. “All tools available help: getting vaccinated and boosted reduces risk of severe illness, testing before and after gathering, wearing masks when indoors, and staying home and away from others when sick reduces transmission.”