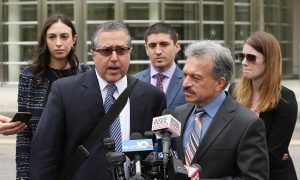 Nancy Salzman, exits following a hearing on charges in relation to the Albany-based organization Nxivm at the United States Federal Courthouse in Brooklyn at New York, U.S., July 25, 2018. (REUTERS/Brendan McDermid)
Crime and Incidents

A top-ranking member of the purported self-help organization NXIVM—which gained infamy over egregious sex-trafficking charges—pleaded guilty on March 13. At the same time, the group’s leader was hit with new child pornography charges.

The latest development in the high-profile New York case—which has seen its trial date repeatedly pushed back—marked a major turn for the future of NXIVM’s high-ranking members, who were first indicted last year.

Nancy Salzman, the former president of NXIVM, told Judge Nicholas Garaufis in Brooklyn that she had teamed up with leader Keith Raniere because she wanted to improve their lives. She broke down in court and admitted to having lost her way when she joined efforts to spy on perceived enemies seeking to expose the inner workings of the Albany, New York-based group.

“It has taken some time and soul-searching to come to this place,” said Salzman, choking back tears. “I accept that some of what I did was not just wrong, but criminal. … If I could go back and do it all over again, I would. But I can’t.”

Two hours later, after Salzman’s guilty plea to one count of racketeering conspiracy, prosecutors unsealed an indictment against 58-year-old Raniere that accuses him of twice inducing a minor to “engage in sexually explicit conduct for the purpose of producing one or more visual depictions of such conduct” in 2005.

Raniere’s defense attorney, Marc Agnifilo, denied the new allegations in a statement on March 13. Agnifilo also questioned the timing of the allegations as his client was nearing trial on other charges.

The new charges “serve only to taint the jury pool,” Agnifilo said. “If the charges were legitimate, they would have brought them a year ago.”

Salzman was involved in stealing identities of the group’s critics and hacking into their email accounts from 2003 to 2008, prosecutors said. They also alleged that she conspired to doctor videotapes showing her teaching NXIVM’s lessons before the tapes were turned over to plaintiffs in a New Jersey lawsuit against the group. Sentencing for Salzman was set for July 10.

According to her bio, Salzman used to work as a corporate consultant in New York state before she met Raniere and “discovered an approach to personal growth that yielded powerful and permanent results.”

Her plea comes about six weeks before Raniere’s trial, which is expected to detail allegations of a master-slave secret society within NXIVM that brainwashed women into having sex with Raniere. Some women were allegedly branded with Raniere’s initials.

NXIVM allegedly recruited members on the condition they would give up personal, often embarrassing, information about themselves, including compromising images or videos, as “collateral.” According to the charges, once inside, members were regularly required to provide additional collateral to ensure they kept secret the group’s activities.

Each member has denied the charges.

Salzman apparently won’t testify for the government: There was no agreement to cooperate as part of the guilty plea to a charge that carries an estimated maximum term of up to 41 months in prison.

Raniere was first arrested in Mexico last year and is being held without bail in Brooklyn.

NXIVM masqueraded as a self-help company that ran “executive success programs” and other self-help curricula, prosecutors say. They allege that the society actually functioned as a boot camp of sorts for recruiting personal slaves for Raniere.

The group previously made headlines when Mack was arrested in connection with the group. Mack allegedly recruited girls for a secret society within NXIVM, and founded by Raniere, called DOS, or “The Vow,” around 2015. DOS is purported to be an acronym for the Latin “dominus obsequious sororium,” which translates loosely as “master over the slave women.”

According to court documents, the secret society allegedly operated as a pyramid scheme, with levels of “slaves,” headed by “masters”; slaves were then expected to recruit their own slaves, thus becoming masters themselves.

Raniere, the purported master of the DOS inner circle, had access to all the girls in the group, court documents indicate. Some of NXIVM’s inner teachings also allegedly touted the need for men to have multiple sex partners, but for women to be monogamous, prosecutors say.

“The details of these alleged crimes become more and more grim as we continue to dig deeper into the conduct of this organization and its intended mission,” said FBI Assistant Director-in-Charge William Sweeney in a statement last year.