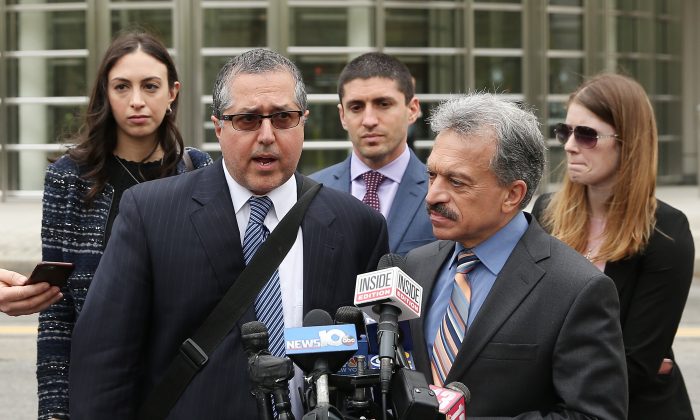 Legal Council representing Keith Raniere and the group NXIVM Mark Agnifilo and Paul DerOhannesian speak to the media outside the United States Eastern District Court after a bail hearing for actress Allison Mack and NXIVM founder Keith Raniere in relation to the sex trafficking charges in the Brooklyn borough of New York City on May 4, 2018. (Jemal Countess/Getty Images)
Crime and Incidents

NEW YORK—Clare Bronfman, heiress of Seagram, a billion-dollar liquor company, was arrested with three other women on July 24 for a barrage of crimes related to running the secret society known as NXIVM, prosecutors announced.

A federal court unsealed a superseding indictment that charged Bronfman, a member of NXIVM’s executive board, for the first time, as well as Kathy Russell, a former bookkeeper, Nancy Salzman, the president of NXIVM, and her daughter Lauren Salzman, also a board member.

The recent charges come after leader Keith Raniere and former “Smallville” actress Allison Mack were previously arrested over sex-trafficking charges and conspiracy to commit forced labor. Both will be arraigned on July 25 before Judge Garaufis in Brooklyn.

The New York-based NXIVM masqueraded as a self-help company that ran “executive success programs” and other similar curricula. In wake of the recent allegations, the company announced the suspension of all operations until further notice.

“The details of these alleged crimes become more and more grim as we continue to dig deeper into the conduct of this organization and its intended mission,” said FBI Assistant Director-in-Charge William Sweeney in a statement.

“Clare Bronfman did nothing wrong,” Necheles told Reuters. “NXIVM was not a criminal enterprise but instead was an organization that helped thousands of people.”

Members of the NXIVM society were recruited on the condition they gave up private information on themselves, including compromising images or videos, as “collateral.” Once inside, they were regularly required to provide additional materials to ensure they kept secret the society’s inner workings.

Bronfman was the group’s largest financial backer, contributing at least $150 million, Frank Parlato, a whistleblower who first broke the story about the society’s schemes, told The Epoch Times. The $150 million was also cited in documents that came out in a legal case going back to 2010.

While some money went into recruiting, the majority, Parlato says, went into legal fees so NXIVM could prosecute their enemies, who were largely whistleblowers.

“As alleged in the superseding indictment, for over a decade, Keith Raniere was the leader of a racketeering conspiracy in which he and members of his inner circle committed a broad range of serious crimes from identity theft and obstruction of justice to sex trafficking, all to promote and protect Raniere and Nxivm,” stated U.S. Attorney Richard P. Donoghue.

Brandon B. Porter, NXIVM’s doctor, is also accused of illegally conducting a slew of shocking human experiments among other accusations. Just recently he attended his hearing on June 27.

Depending on the findings of the closed-door hearing, Porter, 44, a high-ranking member of the society could face a criminal referral to the New York State Attorney General. The current charges only center on suspending or revoking his license.

Porter is accused of conducting illegal and highly perverse experiments, including a so-called “fright study,” which involved showing murder and dismemberment videos to subjects without their consent. In another incident cited by the OPMC, 50 to 60 children fell ill from “an undetermined infectious disease” at an NXIVM retreat in August 2016.

A spokesperson told The Epoch Times previously that they could not comment until the hearing committee renders a “determination and order.” A timeline for when that would occur was not disclosed.

“Due to the confidential nature of the proceeding, the department cannot comment on the evidence presented at the hearing, any witness’s testimony, any exhibits, or legal arguments presented,” spokesperson Jill Montag responded via email.

While Porter himself could not be reached for comment, his lead attorney, Michael S. Kelton, said in an email on June 29 that they were “optimistic” about the future.

“We are very pleased with the way yesterday’s hearing session went. We have an excellent judge and a very attentive and professional hearing panel,” wrote Kelton. “There are many more hearing sessions scheduled over the next few months and we are very optimistic.”

Results of a Google search for Porter’s office in Albany lists it as “permanently closed.”