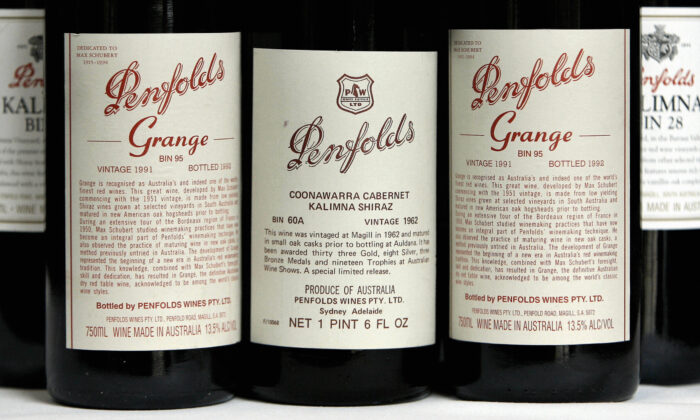 Penfolds has a 178-year history and is one of Australia’s oldest wineries—like many other local exporters, the company was hit by tariffs ranging from 107.1 to 212.1 percent as part of the Chinese Communist Party’s ongoing trade war against Australia.

The move came in retaliation to calls from Foreign Minister Marise Payne for an independent investigation into the origins of COVID-19.

Efforts have been underway by Australian businesses to diversify trade away from China to mitigate losses from the trade war—with a significant uptick of wine exports across Asia, including Singapore (up 108 percent over 2021 to AU$166 million), Hong Kong (up 45 percent to $191 million), South Korea (up 74 percent to $47 million), Taiwan (up 65 percent to $31 million), and Thailand (up 31 percent to $28 million).

Penfolds, however, has decided its best approach to maintaining market share in China is to produce wine locally.

“With our confidence around our Chinese country of origin, Penfolds … we are going to start talking to customers in China pretty much from tonight and tomorrow to start to get the ball rolling,” Tim Ford, CEO of Penfolds’ parent company Treasury Wine Estate told The Australian newspaper.

“China is an emerging fine winemaking region, and we’re confident we can produce a premium Chinese Penfolds that maintains the distinctive Penfolds house style and uncompromising quality.”

Meanwhile, the Australian government is still progressing two actions at the World Trade Organization against China over wine and barley tariffs.

According to Peter Draper, executive director at the Institute for International Trade at the University of South Australia, obtaining a genuine resolution will be difficult. However, the Australian government is most likely using the platform to expose Beijing’s actions and behaviour.

“As they say, ‘Sunlight is the best disinfectant.’ I think that’s what the Australian government is aiming for in this case,” he told The Epoch Times previously.