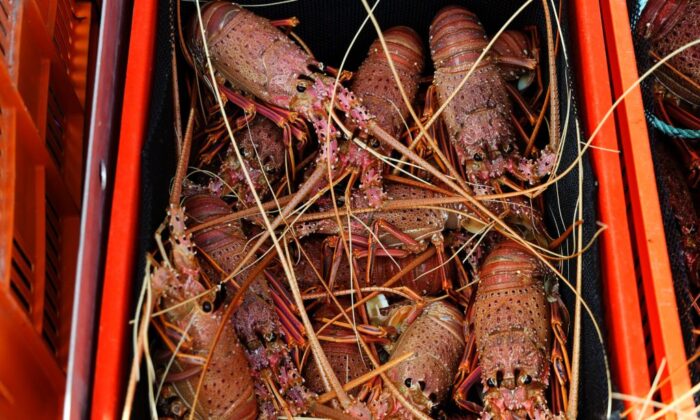 Driven by strong demand, the lobster “grey trade” is thriving, with importers moving the Australian goods to Hong Kong and then into Mainland China via waterways.

In May, Chinese police found over 569kg worth of lobster during a raid, with an estimated street value of US$19,300. The shellfish were found along with typical goods preferred by smugglers including handbags, jewellery, shark fin, and smartphones.

In another instance, Chinese police seized 100 boxes—weighing 1,274kg—containing the famous Western Rock Lobster. The street value of the crustacean was estimated to be US$46,500, according to the South China Morning Post.

The increasing regularity of shellfish appearing in the “grey market”—which technically is not illegal—coincides with the Chinese Communist Party’s (CCP) wide-ranging economic coercion campaign against Australian exports.

This lobster grey trade comes after Chinese customs held up several tonnes of live exports in November 2020 on airport tarmacs, after new testing regimens were implemented and carried out to check for elements of minerals or metals.

Subsequently, several shipments of the live crustacean were left to die.

Australian exporters were quick to divert or halt trade altogether, fearing Beijing had turned its angry sights on the lobster trade.

Fueled by anger at the Australian government for calling for an independent inquiry into the origins of the COVID-19 outbreak in April 2020, the CCP has targeted a range of Australian exports via suspensions and tariffs.

Australian exports such as coal, beef, barley, lobster, timber, lamb, and cotton were swept up in the campaign.

Prior to that, monthly exports to Hong Kong were negligible, but by April 2021 they had reached a new high of over 400 tonnes.

A similar dynamic played out with Australian wine exports, with figures from Wine Australia revealing that despite a drop in trade to China, trade to Hong Kong increased by 55 percent.

For smugglers in Hong Kong, once the goods arrive in the city, the waterways are the most popular way of moving goods to Mainland China.

Smugglers can use speedboats and visit any one of the numerous ports or piers that stretch along the Pearl River Delta Economic Zone, which is home to over 71 million people. Once the goods cross the border into China, the lobsters can be transported further inland.

As a result, major online e-commerce sites Xianyu and Taobao are still able to offer Australian lobsters to Chinese customers.