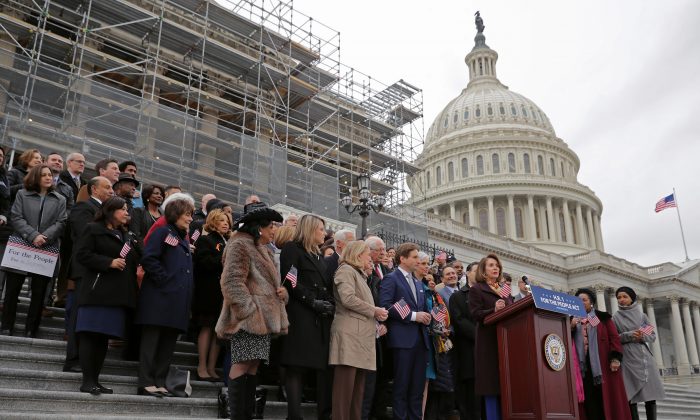 Speaker of the House Nancy Pelosi (D-CA) address a rally with fellow Democrats before voting on H.R. 1, or the We The People Act, on the East Steps of the U.S. Capitol March 08, 2019 in Washington, DC. Chip Somodevilla/Getty Images
Viewpoints

Tinkering With the Voting Age

Earlier in March, Rep. Ayanna Pressley (D-Mass.) proposed an amendment to H.R. 1—the Democrats’ ambitious attempt to “expand Americans’ access to the ballot box”—specifically, to lower the federal voting age from 18 to 16. The amendment passed out of the Rules Committee but failed on March 7 in a full roll call vote.

A week before Pressley introduced her proposal, J.K. Baltzersen, a Norwegian political commentator, wrote an essay about raising the voting age. He later endorsed a 2015 USA Today op-ed in which University of Tennessee law professor Glenn Reynolds similarly suggested raising the voting age to 25.

There are both partisan reasons and philosophical reasons why certain individuals want to either raise or lower the voting age. Pressley’s motive is partisan. She wants 16-year-olds to vote because she believes that Democrats would receive a sizable majority of those votes and increase Democrats’ power. For that same reason, I strongly suspect that Republicans would oppose lowering the voting age. Self-interest and survival remain strong motivators.

Why might younger people be more likely to vote Democratic? To begin with, people tend to be more impressionable in their younger years. Their particular susceptibility to Democrats ambitious, superficially appealing goals is encapsulated in the old saying, “Anyone who is not a socialist when he’s 20 has no heart, and anyone who is still a socialist when he’s 30 has no mind.”

Simply put, our emotions develop earlier than our intellect. Thus, progressives’ Santa Claus rhetoric about ending poverty, free health care (or higher education, etc.), or having government help for whoever needs help tends to be powerfully attractive to the typical, kind-hearted American 16-year-old—especially since the implication is that the kids themselves don’t have to pay for it (although they will eventually).

Many of our college graduates, let alone high school students, lack sufficient understanding of economics to understand that the compassionate-sounding proposals of today’s Democrats may be unaffordable, harmful, and counterproductive if implemented. I say that not just as a college professor who has observed college students for years, but autobiographically. I was a well-read person when I graduated from college, but it wasn’t until I got out into the “real world” and became self-supporting that I even began to understand political economy.

Philosophically, when it comes to voting, the party names are more accurately descriptive than they are in relation to many other issues: Democrats favor a more democratic system—unleashing the power of majorities (“power to the people,” with all of its Marxist undertones); Republicans, by contrast, favor a more republican system—a system of checks and balances that attempts to limit the perpetual threat of political power to individual rights.

The republican philosophy seeks to preserve the order and functional stability of society by protecting property rights against democratic majorities. The republican mindset sees the naked reality of democratic politics as an inherently violent system likened to two foxes and a chicken voting on what to have for lunch (a pithy analogy apocryphally attributed to Benjamin Franklin).

The Founding Fathers were republicans. As students of history, they clearly understood the tendency of democracies to fall prey to mob psychology and to trample the property rights that are the basis of a functional society. They understood the dynamics of unrestrained democracy—the slippery slope where progressively greater inroads against property inexorably lead to the destabilization and eventual collapse of the system itself.

The founders, while believing in a system that is democratic in the sense that governments are accountable to the people they govern, assiduously sought to prevent simple majority rule. Instead, as codified in the Constitution and the Bill of Rights, they desired a republican government based on inviolable individual rights (particularly property rights) that would be legally protected from predations desired by political officers and even a majority of citizens.

The passions that periodically inflame the public mood were to be contained and constrained by limits to democratic power. That precaution underlay the separation of powers, the bicameral legislature, the appointment of Supreme Court justices to lifetime terms, the restriction of the franchise to property holders, the Electoral College, etc.

Today’s Democrats’ democratic impulse has become inflamed and flirts with mobocracy. Their leaders (whether avowedly “democratic socialists” or not) have grandiose plans to radically transform our system. They call for nationalized health care, free college, and the Green New Deal. Not content with legendary Chicago Mayor Richard J. Daley’s power to make the dead vote John F. Kennedy into the White House, today’s Democrats want to harvest (manufacture) votes in a variety of ways. Lowering the voting age is just one of their strategies. Another strategy is to abolish the Electoral College.

The move to deep-six the Electoral College is a pure (well, impure, to be more precise) power play. Nobody knows how many phantom and illegal voters there are in large states like California and large cities like Philadelphia, but if the Electoral College were abolished, then millions of fraudulent or illegal votes in such Democratic strongholds could effectively overwhelm popular vote majorities in less populated states like Nebraska, the Dakotas, Montana, and Wyoming.

An alternative to abolishing the Electoral College is to eviscerate it by thwarting its intent. Several state legislatures have approved a “National Popular Vote” scheme that would disenfranchise majorities of voters in their own states. National Popular Vote legislation compels electors to not carry out the will of the very voters who elected them by voting for the presidential candidate who received the most votes in their own state, but instead to cast their votes for the presidential candidate who received a majority of votes nationwide.

The Democrats’ democratic ideology today leads them to despise our federal system of constitutional protections for smaller states; to scorn the wealth creators and economic benefactors of society as greedy parasites whose justly earned fortunes should be confiscated (except, of course, those fortunes that came from political cronyism); indeed, to hate the Constitution itself because it places limits on the dangerous powers that the democratic impulse lusts to wield.